An apex -shaped monument situated on six lush acres and with 403 rooms, the Taj Palace certainly aspires to be the apex hospitality in Delhi. It is well-located, just 7 km from the city centre and close to a few (but not most) tourist sites. While much is made of the property being situated in Delhi’s ‘tree-lined’ diplomatic enclave, unless one is a visiting foreign dignitary, this detail is of little importance to many a traveler.

The hotel is certainly well-known to business travellers. Indeed, I, too, have worked out of a suite in the hotel in comfort and with an uncommon ease – this, in a country rife with complications. With competent and cooperative staff, a state of the art full-service business centre with interpreter, secretarial services and video-conferencing – and no fewer than eleven venues to hold meetings or conferences ranging in capacity from 40 to 1000, it’s no wonder the Taj Palace has had a lock on the award for Leading Conference Hotel in India for the past three years.

But the Taj is much more than simply a business hotel, conference centre, and landing port for foreign government officials. Modelled on Mughal interiors but with modern styling, the grand dome ceilings, opulent open spaces and luxurious rooms make the Taj Palace deserve its name. It truly evokes royal indulgence and unchecked extravagance. No task appears too mundane or impossible for the can-do staff, and if one is looking for space, there is ample of it both in the rooms, outside in the common areas and through a massive 40,000 sq. ft. of meeting rooms, conferencing space, banquet halls and lobby space. One can get lost in the hotel, and lose sight of the surroundings, protected from the grit of a capital city that has known many rulers. From Chandragupta Maurya to Akbar the great to Queen Victoria to the kings and queens crowned by popular vote, the city has seen great achievement and brutal strife. But one is spared the aggressiveness of the place, ensconced in the opulence of the Taj and pampered by its warm and considerate staff.

Fun for the Foodie

Like the Maurya, the Taj offers many fine dining establishments, six, in fact. My favourite for years was the Chinese Restaurant, Teahouse of the August Moon. After an awkward first visit during which I mentioned to the strikingly beautiful hostess that, as the restaurant was so obviously named for a Pulitzer Prize-winning and Tony Award-winning play set in Japan, shouldn’t they have Sushi? – From her less than enthusiastic reaction, I learned to keep my mouth reserved for tasting and chewing rather than talking. But this is somewhat typical of Indian establishments – they choose a name that sounds appealing without necessarily recognising the import of it.

Teahouse has been replaced by another Chinese restaurant called Spicy Duck (could they have seen the flaw in the name?). While its predecessor offered the spicier version of Chinese called ‘Indian Chinese’ and appealed to local tastes (as evidenced by the ample local crowds it would draw on weekends) ‘Spicy Duck’ boasts to be more authentic. Perhaps it was my Indian taste buds or what my party ordered (Dim sum – lamb, spicy duck dumpling and pork, braised seafood soup,  stir-fried prawn, Hong Kong Chicken, vegetable fried rice and lotus root fungus with assorted mushrooms) the food was somewhat bland. That is to say, it was not at all bad – but against an exorbitant price and with memories of Teahouse not quite faded, the experience was average at best.

For the adventurous soul, Blue Ginger offers a taste of South East Asia. Winner of The Times Food Guide 2014 award for Best Vietnamese Restaurant in Delhi, Ginger is a perfect place to enjoy the fresh flavors and pungent aromas of Vietnamese cooking by internationally renowned Vietnamese Chefs. Visually stunning, the restaurant makes quite an impression. The fact that the Taj group would bank on the success of little-known Vietnamese cuisine at a signature property demonstrates a commitment to innovation and a flair for risk-taking. The risk, I should say, has paid off handsomely.

Another favourite at the hotel is The Orient Express, a fine eatery designed as a replica of the famous train. The ambience captures the romance and intrigue of the of the restaurant’s namesake with menu inspired by the cuisines of the countries through which the famous train passed. It is sure to be a savoury journey, eased into completion with an enticing spread of desserts.

Most Indian hotels offer Indian food but at the Taj’s ‘Masala Art,’ one gets truly authentic North Indian cuisine that does not compromise to blandness of spice-averse taste-buds. Guests can watch chefs prepare meals in dramatic fashion at the live show-kitchen counter while explaining the process and assuring that the meal includes only the freshest of ingredients. A Phulka & Tadka trolley add a unique local dimension to the experience.

For the jet-lagged traveller who is hungry while others are sound asleep, Kafe Fontana offers relief as a 24 hour Mediterranean eatery with live entertainment located at the lobby level of the hotel. It combines traditional Neapolitan, Tuscan, Turk, Greek, Lebanese and Moroccan cuisine with popular Indian fare. Fontana also offers breakfast all the time without compromising variety. Located in the lobby, it features the sights, sounds and aroma of live cooking. The restaurant is seated under a lively bright atrium with a fountain that commands centre stage.

Also located in the lobby is the Tea Lounge, which offers a selection of single estate coffee’s and designer’s teas, cold beverages light bites, including open sandwiches, pastries and the like. The coffee excellent but for a Calcuttan with a refined Darjeeling palate, the tea can be hit or miss. (A good label doesn’t necessarily translate into a good experience; it depends on leaf grade, phase of harvest, age of the leaf and how it is prepared). But, sure – it’s one of the better places to get Darjeeling Tea in Delhi.

One can try dining under the open sky at appropriately named Al Fresco (no, who’s Al Fresco jokes please!). The restaurant overlooks the putting green and outdoor pool. It is particularly scenic on a clear night with candlelit tables and the food being grilled under the stars and especially by the cool light of a full moon. With a surprisingly cultivated wine list, brandies and cognacs as well as cigars on Al Fresco offers a different kind of Delhi dining experience.

The Most Family-Friendly Five Star in Asia

Perhaps what distinguishes the Taj from all other five star luxury hotels in the city is its family and child friendly policy.  Children receive an ‘activity passport’ on arrival. An activity programme is created by a host to take kids on what the Taj describes as “an exciting journey as they engage in bespoke creatively stimulating activities”. A passport packed full of stamps representing a myriad of activities evidences not only a good time but is also a nice memento to take home. Children might have begun new hobbies by the end, and made pleasant memories.  For adults wanting some grown-up time, too, the ‘Kids@Taj’ program can grant a much-needed break from constantly taking care of a child or children’s needs.

Extraordinary hospitality is a signature feature of the Taj luxury brand and comes from a century of practice with utmost focus on the guest. At Taj Palace, the Golden Keys Concierge, personalised butler service and Taj Club facilities boast to “guarantee the best experience”. But it certainly isn’t necessary to request a butler for the hotel to cater to your needs. The concierge staff are always warm and welcoming as well as being knowledgeable hosts, trained to attend to the individual needs of each guest. They can arrange dinners, spa treatments, tickets and tours. Absolutely anything, from a shopping excursion to a relaxing bath at the end of the day, can be tailor-made to create a unique, individual experience. That the service is on a level above that of certain other chains can be accepted without question. Taj is a cut above Hyatt, Radisson and the like in this respect, though not at all out of range of price. 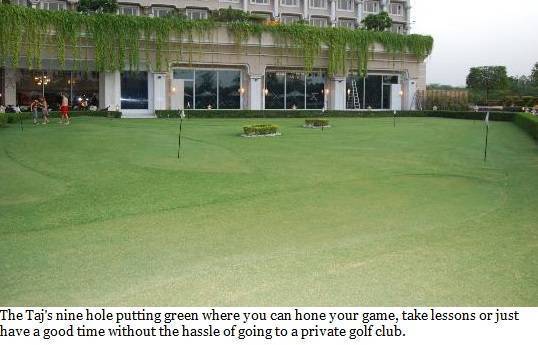 Don’t want to eat in one of the restaurants or order room service? Not to worry, the Taj has private dining rooms that can cater to parties of 12-15 people.

Fancy a game of Tennis?  The Taj will book your courts at the neighbouring Maurya.  They can also arrange lessons and find partners for singles or doubles. The hotel will even send a butler to carry your bags if you don’t feel inclined to lugging round your gear as you walk over to the courts (around 7-10 minutes on foot).

Then there’s golf… Nothing says privilege like whacking around a ball on an immaculately landscaped green while a peon lugs your bag around for you in a country where a crammed population increasingly fights over constrained space. On the other hand, it’s an ideal place to escape the reality of a city bursting at the seams. I don’t play golf – but the people I’ve observed on the green seem to have the guilty smile of those knowing they’re getting something that would be hard-pressed find except at an exclusive club. But that’s what the Taj is, really, a kind of royal club of which you can be an honoured member for as long as your budget or leisure time lasts.

And what a club it is!