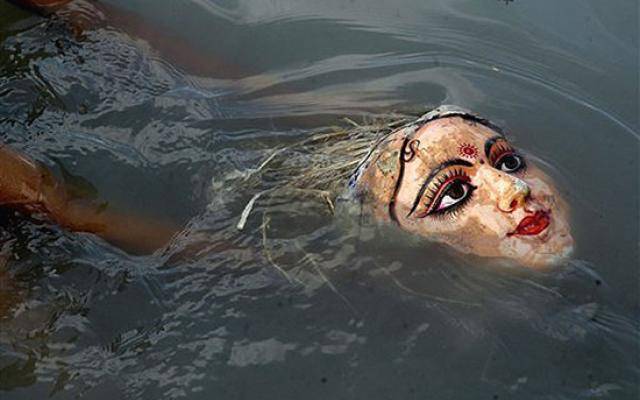 Since 1757 when Raja Nabarkishna Deb, patriarch of the then most opulent Bonedi Bari Durga Puja, invited Lord Clive to his Shobabazar Rajbari Puja when the British Major General who had defeated the despised independent ruler of Bengal, Siraj Ud Daula at the battle of Plassey wanted to give thanks to God, Durga Puja celebrations have carried secular themes.

Unfortunately, in 2017, religious divisions have been created by the state government, which issued a directive in August to ban idol immersion on the 10th day of Muharram, during the Day of Ashura, when Shia Muslims take to the streets to mourn Hussein ibn Ali, the grandson of the Prophet Muhammed. According to the Hindu Almanac, the period of idol immersion overlaps this date, which is Sunday, and Hindus may conduct this ritual on that day.
By supporting a ban even after the High Court at Calcutta ruled this to be illegal as it “restricted the fundamental rights of one religion,” Chief Minister, Mamata Banerjee has done away with secularism in the state. The state government is clearly shown that Islam is the state religion, reducing majority Hindus to a minority status without any of the rights or privileges, thereof.

To put this in context, Muslims have historically participated in Hindu Durga Puja celebrations for generations. Indeed, Minister of Urban Affairs, Firhaud (Bobby) Hakim’s involvement with the Chetla Agrani Club Puja Pandal is one prominent example of how a celebration of culture has triumphed over religious divides. So, in a state where Hindus and Muslims exist in apparent religious harmony compared to other states in Northern India.

In fact, in an interview for a popular Indian blog, actor Kaushik Sen was quoted as saying, “You know I was born in the city and grew up here. It was different back then. Durga Puja was not just a religious event for the Hindus but for everyone living in Bengal. Muharram procession and Bhashan (the term used for the idol immersion) always happened simultaneously. Never did I imagine this would be a matter of confrontation…I lived on Harish Chatterjee street. From the verandah, I have seen Muharram procession and ‘Bhashan’ happening simultaneously. No one ever bothered. The only confrontation was the petty fight among clubs of different Durga Puja committees. That’s about it.”

Hearing three petitions challenging the prohibition of idol immersion or Bisarjan on October 1st, the bench, which included Acting Chief Justice Rakesh Tiwary, ruled that a mere assumption that a law-and-order situation might arise, owing to Vijaya Dashami and Muharram falling one after the other, could not be the basis of imposing curbs on immersion timings.

In its unsparing admonition, the high court delivered the unqualified message that one cannot deny the rights of citizens impulsively or senselessly:
“You are exercising extreme power without any basis… Just because you are the state, can you pass arbitrary order?” the court said, adding: “”If you get a dream, that something will go wrong, you cannot impose restrictions.”

In striking down the ban on idol immersion, the High Court asked the State that if it was their position that religious harmony exists, why can’t the two events occur simultaneously? The apex court added that the government had an obligation to manage the flow of foot traffic of these processions so as to pre-empt any social unrest but, unless one accepts that the two religions cannot co-exist, one cannot infringe upon the fundamental rights of one religion over another.

The order passed on September 21st, also asked the state government to manage the situation by creating designated routes for each procession with adequate security in place in order to avoid overlapping and, and to quell potential disturbances.

Notably, A/Chief Justice, Tiwary said, “Let them (Hindus and Muslims) live in harmony, do not create a line between them.”

Ms. Banerjee responded by saying that she, in effect, is not bound by the rule of law in the form of High Court ruling, a statement that is without precedent in West Bengal. “Slit my throat,” Ms. Banerjee said, fuming over the High Court order, “but nobody tells me what to do.”

Last year, when there was a similar overlap, the BJP went to the High Court, which said the time limits set by the state government for Durga idol immersion on account of Muharram were “arbitrary” and a “clear endeavour” by the state to “appease the minority section of the public”. With the Muslim minority (comprising roughly one third of the state’s population and due to block voting, they hold the swing vote in at least 60 assembly seats) the same criticisms of the government have been made. In the face of the controversy, Ms. Banerjee remains defiant: “If this is appeasement, I shall continue to do so as long as I am alive,” she said.

Ms. Banerjee is not only Chief Minister but also Minister of Home Affairs, a portfolio she took in addition to Chief Minister since the TMC party gained a majority in the WB Legislative Assembly in 2011. This in effect puts her in charge of the police who would normally be responsible for implementing orders of the apex court in West Bengal. In effect, if she directs police to thwart the court order, they will likely obey her.

Officials of the state had intimated that the State would challenge the order in the Supreme Court. However, in a bizarre turn of events, the following day (last Friday) Ms. Banerjee changed its position by taking the baffling and utterly stance that the High Court had ruled in its favour.

The Hindu majority in West Bengal is kept in check by an environment that combines apathy and fear. For this reason, despite a deadline of 5:30 pm, today, to apply for idol immersion on Sunday none of the clubs hosting pandals in the city have applied for immersion. Such collusion is precipitated, too, by the funds that poor in from the state coffers to the clubs and the politicians who are involved in them. The connivance is what has prevented the state from falling into constitutional crisis, for volunteer observation of Ms. Banerjee’s ban rather than the state appearing to enforce it, avoids contempt of court on the part of the state and all the implications that follow.

The fact is, Bengali Hindus have no champion in the state. The BJP wants to step into that vacuum but their politics (at least those of some of its members) have been viewed as extreme and distasteful to the historically liberal ethos of Bengali society. The BJP has strong support among non-Bengalis. But they have little stake risking retaliation from the State simply to uphold the traditions of a festival that, while rooted in the Ramayana – an epic whose protagonist is revered by non-Bengalis (save the South) – is still viewed through a regional lens. This myopic perception is one supported, too, by Bengalis; in the current environment, it is too their detriment.
In the final analysis, in a contest between Didi and Ma Durga, the clear loser is secularism.