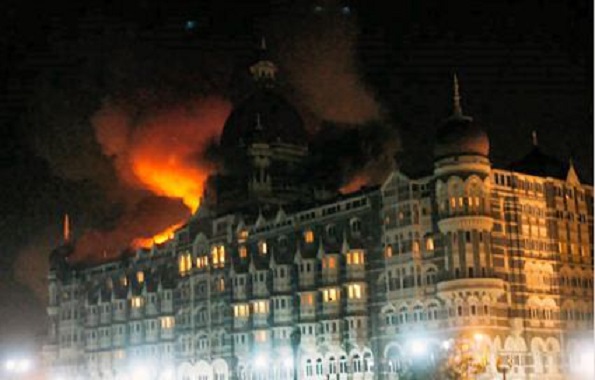 By S.B. Veda with inputs from agencies

Not long after the tragic events of 26/11 captivated the attention of the world, and in the flames of the Taj Mahal Hotel, illuminated the brutal and savage face of Islamic terrorism, which Indians had been facing for decades, Ratan Tata, then Chariman The Tata Group,  gave an interview to Fareed Zakaria on US Television on the Cable News channel, CNN in which he laid all the blame squarely on the Indian Government for not protecting Mumbai, even stating that Indian commandos were “ill-equipped” to deal with the situation, and their training paled in comparison to expertise of the militants who held them at bay.

Mr. Tata was then chairman of the Tata Group and remains Chairman Emeritus of Tata Sons – its holding company, owner of the Taj hotel chain, of which opulent The Taj Mahal Hotel in Mumbai is a prized asset, where most of the carnage of the terrorist attack took place in 2008 took place.  Zakaria failed to ask the executive atop the hotel chain’s corporate pyramid about what responsibility the hotel-owner had to safeguard his guests; when Zakaria whose comportment was mostly deferential if not outright servile Mr. Tata, did finally ask about security and whether the terrorists had an “inside connection in the hotel” Ratan Tata, said he did not know, adding “Yes, you know, it’s ironic (that we were warned that an attack was impending) and we did have some measures to, you know, where people couldn’t park their cars in the portico where you had to go through a metal detector. but if I look at what we had, which all of us complained about, it could not have stopped what took place. They didn’t come through the entrance. they came from somewhere in the back…they went through the kitchen…and they did not go through the front. All our arrangements were in the front.”

The question of why there was a lapse of security in the back of the hotel, which was a more likely place for terrorists or criminals to approach the building instead of through the front door – was never answered during the interview or since, and the respected executive, Mr. Tata had succeeded in focussing blame for the security fiasco on the soft target of India’s ineffectual bureaucracy and body politic.

It is an easy premise to accept, isn’t it – after all, how could Ratan Tata have succeeded where intelligence agencies and the Indian Army could not? After all, so many brave employees of the Taj refused to flee, staying at their posts to protect guests when logic would dictate to run for one’s life.  Is that not enough? Not so says one of the victims, namely William Pike, who was forced to jump from the burning building or face certain death at the hands of the savage terrorists when the Pakistan-based Lashkar-e-Taiba stormed the hotel in 2008. The attacks killed 166 people and left hundreds injured.

It was a treacherous fifty foot drop, which resulted in his paralysis. He contends that if management of the Taj had done its job in providing adequate security, much of the devastation, including possibly his own debilitating injuries, could have been avoided.

Pike, a freelance film-maker, who had been holidaying in Mumbai with his girlfriend, underwent several surgeries after his daring escape from the burning death trap.  He has claimed that the hotel failed to protect its guests despite being warned about possible attacks.

In October, US intelligence agencies warned Ratan Tata that monitored chatter indicated that a terrorist attack was being planned on the Taj Mahal Hotel in Mumbai. Security was increased, briefly, as consequence but was removed soon after.

In an interview to Newsweek, Tata acknowledged that he was warned but said little could be done, as the attackers chose to use the back entrance. Apparently, monitoring all of the entrances was clearly beyond the budget of one of the World’s richest and most powerful men.

The courts in London are listening to Mr. Pike’s appeal, and appear to be taking a dim view of Ratan Tata’s laissez faire attitude on the issue of hotel security, as evidenced by Pike’s victory on his claim of the right to sue the owners of Taj Mahal Palace Hotel in a British court of law rather than in India, Due process is in the world’s largest democracy is notoriously slow and, at times, prone to the influence of deep pockets for which the Tatas certainly do not lack.

Tata Group firm, Indian Hotel Company Limited, had argued that Will Pike’s negligence claim should be heard in India but a high court judge in London accepted his argument that taking the case through Indian courts could run into years.

“In summary, my estimation is that the time this case would take to reach the probable end stage in India is some 20 years…I am persuaded that it is clearly the case that England is the appropriate forum for the trial of this action,” Justice Stewart said in his ruling at the Royal Courts of Justice.

The Indian Hotel Company was given the right to appeal against the ruling and the case will now go to the court of appeal for a final decision.

The 33 year old Pike expressed his satisfaction with the ruling, “I’m very relieved about the judgement. For one thing, it means that justice will be allowed to take its course – if the trial were to take place in India, it simply wouldn’t have happened.”

“So now, regardless of the outcome, at least I’ll know whether the hotel could have done more to ensure my safety, as well as everybody else’s in the building.”

After 26/11, the Indian public and media rallied around Ratan Tata, and the question of his culpability in the matter was never seriously raised. Similarly no questions were raised about the responsibility of the Oberoi Group, which also runs a luxury hospitality empire, and whose Trident hotel was also attacked in 2008.

Others see the ruling as unfair in that the authorities in Pakistan, where the terrorists originated and whose intelligence agency, The ISI, has been found to have planned, coordinated and directed that attacks, are not being sued.  Many wonder why civil actions are not pursued in cases where state-directed terrorism against innocent civilians staying within the borders of a peace time neighbour results in mass murder and maiming, not to mention damage to property.

Previously, Marianne Pearl, widow of slain journalist Daniel Pearl filed suit in the US against Pakistan-based terrorists and a prominent Bank in Pakistan in 2002, contending that the bank knew about the plot to kill her husband but the suit was dropped in 2007, suddenly, without any official explanation being given, amidst concerns for Mrs. Pearl’s safety.

An Indian businessman who was caught up in the attack on the Taj said: “I can’t see how the Taj can be blamed — it was a victim of terrorism. Many of its staff died trying to protect guests.” But that doesn’t contradict the point that Pike is making: that adequate security measures, surveillance, better due diligence would have saved lives, including those employees of the hotel, who were just as much victims of their employer’s negligence as the guests.

Lawyers for the Taj had wanted the case thrown out on the grounds that the High Court in London could not have jurisdiction over events that occurred in India.  Though it seems in a world where commerce knows no insurmountable geographical barrier, jurisdiction is a line that can no longer be so easily and precisely drawn. The Tata Group is no less a multinational than Union Carbide, perhaps more so given the diversity of their business interests. In the U.K., in addition to hospitality, the company own assets in the beverage industry, including the marquee brand, Tetley Tea and the prized car-makers, Jaguar and Land Rover. It is the second-largest steel company in Europe and provides technology and consulting services throughout the continent.

Neither the foreign office nor the ministry of justice was willing to comment on the case which many will see as opening a Pandora’s box. In theory, the ruling means any victim of terrorism anywhere in the world can file a claim for compensation in the courts in London if some kind of British link can be established.

Pike has been joined in his legal action by his former girlfriend, Kelly Doyle.

They say they had not been given proper advice about emergency procedures and evacuation routes and, when they heard doors being kicked in and shots fired, had to break a window with furniture from their smoke-filled room and try to reach the ground using bedding and curtains knotted together.

The judge said Pike and Doyle “have clearly demonstrated and proved that granting a stay in English proceedings and requiring proceedings to be commenced in India would amount to a denial of justice”.

Pike broke his back and pelvis and also fractured his left wrist and right elbow when he fell.

Pike’s lawyer Russell Levy, from Leigh Day, maintained that the case should be heard in the UK, because his client resides in that country, and the Indian Hotels Company Ltd has a substantial business presence, there.  Its interests include the St James Court Hotel and two upmarket restaurants — the Bombay Brasserie and Quilon.

Levy said before the hearing: “Trying to fight the largest corporate group in India, and India’s richest man (apparently a reference to Ratan Tata), through the Indian courts would be an exercise in futility.”

Justice Stewart agreed: “My estimation is that the time this case would take to reach the probable end stage in India is some 20 years, i.e., 15 years in high court plus 5 years on first appeal.”

The court heard how the equivalent case in the UK courts would take 2 to 3 years.

Justice Stewart went on to explain: “(Pike) is a man who is not quite 34 years of age. A favourable decision in England would give him the money substantially to improve his standard of living and enable him to better come to terms with his disability when he is about 36 years of age. If the proceedings have to be brought in India then he would be something like 50 to 55 years of age before that occurs.”

Welcoming the ruling, Levy said: “This is a great relief for our client who is consigned to a wheelchair. The truth is that he would not be able to pursue his claim in India. Justice would have been denied, which is precisely what the defendants were trying to achieve.”

He went on: “As much as they dislike the prospect of having to do so, the Indian Hotels Company Ltd will now have to defend this case in a court of law. The main issue will be whether or not their security and safety systems were adequate to protect guests and staff. It is our view, based on expert evidence, that they failed to take account of warnings prior to the attack in November 2008 that their hotel was a target and that they were more concerned with not worrying guests and staff than taking steps to secure their safety.”

Levy said: “This judgment is of importance to all victims of accidents abroad. It will also be of great interest to Indian victims of the attacks who are effectively prevented from pursuing claims in India because of the inadequacies of their current civil justice system.”

If Pike wins his case, the courts may award him in excess of a million pounds, which would set a precedent and encourage other claimants.

Tata Sons has a reputation of being an ethical company, and most of its equity is held in ‘charitable trusts’. It remains to be seen how charitable they will feel with Mr. Pike, and others like him, once the result of their appeal is known.

At the Taj Mahal Palace and Tower Hotel

At the Oberoi Trident

TGC With Inputs from Reuters