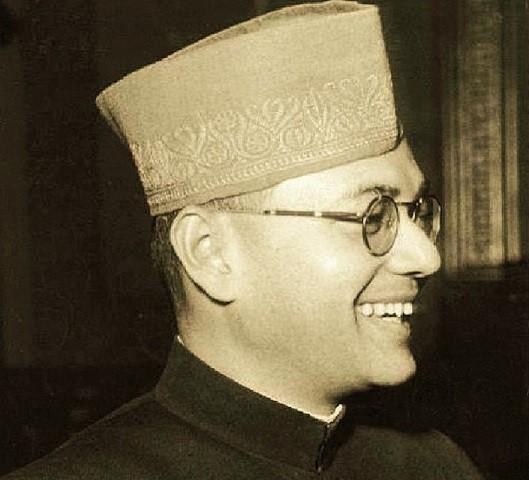 On the 117th anniversary of his birth, we reflect on the life of Subhas Chandra Bose. . He was the ninth child of Prabhavati Devi and Janakinath Bose, who had fourteen children. As a boy and young man, he was spiritually inclined and involved in social work. He studied at Ravenshaw Collegiate School where he he stood second in the matriculation examination. In 1913, he gained admission to Presidency College where he studied briefly but was expelled for assaulting an English professor named Oaten, for the latter’s anti-India comments. He later joined Scottish Church College at the University of Calcutta, where he earned a B.A. in 1918 in philosophy. He continued his study of philosophy and, later,  psychology at Cambridge University, England, and considered becoming a monk.

His father, a prominent Barrister advised him to sit for the prestigious Indian Civil Service Examinations (ICS). He studied for some months, and stood fourth. This was at a time when prominent Indian barrister, Motilal Nehru had advised his son Jawaharlal who knew Subhas from Cambridge, not to sit for the exams as he would surely fail, prompting grudging respect and admiration from the man who would go on to become India’s first Prime Minister.

Subhas was disinclined to enter the ICS, and had been in England not only to get a higher education but also to study the British. Secretly, he was preparing to launch himself vigorously into the struggle for India’s independence.

“My father told me that when he saw Netaji in a bowler hat, suit and tie, in England, he thought Subhas has changed.” Dwaraknath Bose, Netaji’s nephew told The Global Calcuttan. He explained to us that Netaji was submerging himself in English culture, in order to understand his adversary.

Donning the dhoti and and kurtha in India, he threw himself into the freedom movement upon his return to India.

Founding the newspaper Swaraj and taking charge of publicity for the Bengal Provincial Congress Committee, he was mentored by Chittaranjan Das who was a spokesman for aggressive nationalism in Bengal. In the year 1923, Bose was elected the President of All India Youth Congress and also the Secretary of Bengal State Congress. He was also editor of the newspaper “Forward”, founded by Das.

Bose worked as the CEO of the Calcutta Municipal Corporation for Das when the latter was elected mayor of Calcutta in 1924 but when nationalists were rounded up by British authorities a year later, Bose was arrested and sent to prison in Mandalay, where he was intentionally exposed to tuberculosis (a tactic the British used on the most dangerous of prisoners).

In 1927, after being released from prison, Bose became general secretary of the Congress party and worked with Jawaharlal Nehru for independence with whom he had become friends. Again Bose was arrested and jailed for civil disobedience; this time he emerged to become Mayor of Calcutta in 1930. During the mid-1930s Bose travelled in Europe, visiting Indian students and European politicians. During this period, he also researched and wrote the first part of his book The Indian Struggle, which covered the country’s independence movement in the years 1920–1934. Although it was published in London in 1935, the British government banned the book in the India out of fears that it would encourage unrest.

By 1938 Bose had become a leader of national stature and agreed to accept nomination as Congress President. He was re-elected the following year but was forced to resign when members of the Working Committee, who were close to Mahatma Gandhi, asked him to accept a resolution that  effectively enabled Gandhi could veto his decisions. Bose’s aggressive nationalism was at odds with Gandhi’s non-violent methods. In effect, the resolution would have made Subhas a mere figurehead to Gandhi’s dictatorship – a model not unlike the current set-up of the UPA government.  Subhas could not accept an approach that was so contemptuous to democracy, so he resigned.

Jawaharlal Nehru had not openly supported the movement to restrain Bose but gave a speech “leaving everybody thinking he did” according to Subhas, leaving him disillusioned with his old friend.  Subhas resigned to found The Forward Bloc, which is still active in the politics of West Bengal, and his activities prompted the British to arrest him again, placing him under house arrest.

Then began a life as a fugitive from the British beginning with his daring escape from captivity in disguise, going through Afghanistan and the Soviet Union to Germany, aided by Aga Khan III and Bhagat Ram Talwar, who was a Soviet spy.

The arrival of Subhas Chandra Bose in Germany in 1941 (during the turbulent period of World War II) and his anti-British activities in that country in co-operation with the German government, culminated in the formation of The Indian Legion. This marks perhaps the most significant event in the annals of India’s fight for independence. This event not only can be regarded as a historical link-up with what Bose himself chose to describe as “The Great Revolution of 1857,” and which (in his words) “has been incorrectly called by English historians ‘the Sepoy Mutiny,’ but which is regarded by the Indian people as the First War of Independence.”

It also recognizes that the persuasive methods conducted through a non-violent struggle under the leadership of Gandhi, which had been in play since the 1920s, had failed. An armed assault on the citadel of the British Empire in India was the only alternative left to deliver the country from bondage. While other leaders of the Indian National Congress fell short of realizing this, which turned a blind eye to world events that provided India with a golden opportunity to strike at the British by a force of arms, Subhas rose to the needs of the hour and was quick to seize that opportunity.

Subhas was welcome in Germany but the Nazis had their own plans for him, hoping to use him as a propaganda tool. He made broadcasts from Berlin, which reached India, the first of which electrified the masses, prompting the Congress party to adopt a more popular approach, which mobilized the people more directly, instead of its preferred legalistic approach to independence.

While in Europe, Subhas came up with the concept of training POWs captured by the Axis forces, and organizing them into a military force to be used against the British, obtaining agreement with the Germans to train the POWs with strict military discipline. While many POWs were reluctant and suspicious of Subhas, he won them over; he was laying the foundation for the the army of liberation, which was to come.

Disillusioned with Nazi Germany in 1943,  when Hitler started to implement The Final Solution, his plan for the extermination of Jews, Subhas, advised his Jewish friends to flee Germany, and left himself.  After first planning to go to Japan by air (but the plane that he had intend to board crashed), Bose boarded a German U-Boat submarine, instead.  The three month underwater journey, the majority being in the tiny German sub, with a transfer to a Japanese submarine in the Indian Ocean was unprecedented and extraordinarily perilous at a time of fierce nautical conflict.

The German U boat trawled through the hostile waters of the North Sea, and the western seaboard of Europe before  going all the way around the Horn of Africa.  Off the Southern African coast the U boat came under attack by British naval forces. They fired back, sinking British merchant vessel S. S. Corbis, before escaping.

The U Boat rendezvoused with a Japanese submarine off the coast of Madagascar on Apr 26, 1943. After waiting two days for the stormy seas to subside, Subash and his aide Abid Hasan were transferred in continuing rough weather, from the German U boat to the Japanese submarine in a rubber dingy. A week later, he disembarked at Sumatra and was flown to Japan on a Japanese war plane.  There, he was welcomed by Rash Behari Bose, who had been active in organizing Indian expatriots in Japan since 1942 in the Indian Independence League.

Subhas unveiled his plans for the creation of a liberation army, and the concept was welcomed by R.B. Bose others involved in the freedom struggle.  There he rallied and commanded a force of between 40,000 and 50,000 soldiers (accounts vary) called the Azad Hind Fauj or Indian National Army (INA).

It was a force that united Indians regardless of cast or creed, and included for the first time, women – a move that was quite ahead of its time.

While some historians have downplayed the effectiveness of the INA as a military force, the British government has said that its victory over the this army on the Burmese front was among its most fiercely fought battles, and most significant. The idea of Subhas marching into Calcutta, after piercing the eastern defences of the Raj, was the most heavily feared outcome in the East.

The ensuing INA trials (trials of recaptured POWs from the INA, tried for treason) electrified the nation a second time, and caused the regular Indian Army to mutiny in three places. The British were forced to negotiate for independence.

On August 18th 1945, Subhas purportedly boarded a plane, which crashed in Formosa, present-day Tawain. It is a plane crash that the Taiwanese government claims never happened.  What happened to Bose remains a mystery from the public but maybe not to the Government of India. It has 64 files in its custody on Bose’s ‘death’ but refuses to release them on the grounds that it “may affect relations with foreign governments” fuelling speculation that a deal was struck with the Soviet Union (where Bose is said to have landed) post-independence to keep Bose from returning.

To this day, January 23rd is not a national holiday. Only West Bengal and Orissa (where Subhas born) recognize its significance. And though the INA soldiers wanted to be included in the Indian Army, after independence, it was disbanded, and many ex-servicemen died in poverty, denied government pensions.

Perhaps the great tragedy of Subas’ life is that in death, he is still under attack – this time its a battle over his legacy against the very government who owes its existence to his vision and courage.  It is for this reason, that January 23rd is not only a day of celebration of the life of Subhas Chandra Bose but also one of regret at what might have been had the great nationalist been returned to the citadel to serve his people.

116 Comments on “Tribute to Netaji”