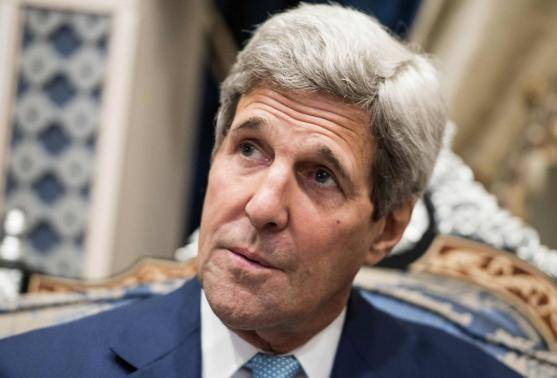 Kerry Presses Arabs States to Support US Against ISIS

U.S. officials have cast the campaign against Islamic State as a global fight against Islamist radicals and the threat they pose beyond Syria and Iraq, particularly through foreign fighters drawn from nearly all points of the planet.

While Washington has not identified specific threats within the United States, U.S. officials say they believe its fighters could return to home countries and carry out attacks. The beheading of two captive American journalists in the past month has also enraged many Americans who want Obama to retaliate.

In a strong measure of support, Saudi Arabia has agreed to host training camps for moderate Syrian rebels who are part of Obama’s broad strategy to combat the militants, who have taken over a third of both Syria and Iraq, U.S. officials said.

The agreement, outlined by Obama’s aides on the night of his speech laying out his expanded campaign against the Islamist group, appeared to reflect the depth of Saudi concern about Islamic State’s threat to the region.

Detailing what Kerry would seek from regional partners at a meeting of Arab powers and Turkey in Jeddah, a senior State Department official said: “We may need enhanced basing and overflights … there’s going to be a meeting soon of defense ministers to work on these details.”

Wider overflight permission from regional states would increase the capacity of U.S. aircraft to attack anti-aircraft weaponry operated by Islamic State in Iraq and Syria, and if deemed necessary impose a no-fly zone.

Saudi Arabia, the richest Sunni Arab country, this year outlawed Islamic State as an extremist organization, but it is worried that the focus on the group will distract from what it sees as a bigger regional threat stemming from Shi’ite Iran.

The conservative Islamic kingdom has long pressed the United States to take a bigger role in aiding moderate Syrian rebels, whom it sees as the best hope of tackling both Islamic State and the regional ambitions of Tehran, Riyadh’s regional rival.

In a possible reflection of the Saudi-Iranian struggle for influence in the region, the Islamic Republic criticized the emerging coalition, saying some of its members backed “terrorists” in Iraq and Syria, an apparent reference to several Gulf Arab states including Riyadh who back Syrian rebel groups.

Foreign ministry spokeswoman Marzieh Afkham, speaking on state television about the U.S.-led alliance, said there were “severe misgivings about its determination to sincerely fight the root causes of terrorism”.

She made no mention of a prime-time speech on Wednesday in which President Barack Obama announced he had authorized stepped-up U.S. air strikes in Iraq and would for the first time extend the aerial assault into Syria.

Also on Wednesday, in Baghdad, Kerry endorsed Iraqi Prime Minister Haider al-Abadi’s plans to mend Baghdad’s ties with Sunnis and Kurds, and said Abadi’s new Shi’ite-led government was “the heart and backbone” of the fight against Islamic State.

Kerry, on a tour of the Middle East to build military, political and financial support to defeat the militants, said “a new and inclusive Iraqi government has to be the engine of our global strategy against ISIL.”

Kerry arrived in Jeddah, the summer seat of the Saudi government, to seek support for a number of initiatives that Washington hopes will undermine the militants.

The initiatives include efforts to stop the flow of money to the group by tackling oil smuggling and cracking down on contributions from private donors, the senior U.S. State Department official told reporters traveling with Kerry.

“They need to get at the clerics because the clerics can get at the mosques in the neighborhood and they have to expose ISIL for what it is,” the official told reporters.

Saudi Arabia is pivotal, say U.S. officials, because of its regional stature and influence with Sunni Arabs.

The White House says it will target the group’s “leadership, logistical and operational capability,” and attempt to “deny it sanctuary and resources to plan, prepare and execute attacks.”

Saudi Arabia’s senior clergy have been attacking Islamic State and al Qaeda over the past month, denouncing the militant groups as heretical and saying it is forbidden to support them.

U.S. officials said a critical component of the plan to train and equip the Syrian insurgents, who have received only modest American backing so far and have failed to coalesce into a potent fighting force, was the Saudis’ willingness to allow use of their territory for the U.S. training effort.

UAE ambassador Yousef al Oteiba, writing in the Wall Street Journal, said his country was ready to join what he termed a coordinated international response that should to be waged not only on the battlefield but also against militant ideology.