Malala and Nadella – portraits in contrast on the plight of women

CACLUTTA – The Nobel Peace Prize has long been used to make a point – and in the process, the prize has lost luster and significance. Those who had commanded others to kill, break bones, assassinate, their sins against peace forgotten, were honored on the shake of a hand. When the Laureates returned to the fight or some less savage political version of it, the prize could not be rescinded. But hey, that’s politics.

This week, the Nobel Committee went a long way to restoring their reputation by honoring Malala Yousafzai, a brave girl, who detailed the plight of young women living under the terror of the Taliban when others were too afraid.

The Swat Valley in the frontier lands of Pashtun Pakistan were overrun by the Taliban in the aftermath of the Afghanistan war, and the terrorists had banned girls from going to school. Seven years ago, the BBC Urdu service wanted someone to write about what it was like to live under these conditions – and Malala, then only 11 started blogging for them under an assumed name to protect her identity. 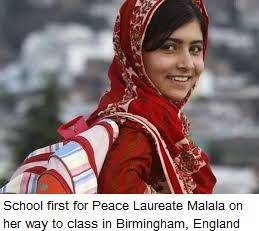 Incredibly, she survived but, unable to return to her native Pakistan, she relocated to Birmingham where she continued to write and bring attention to her cause – and in the process to the cause of the oppressed women of Islamic cultures.

She started a fund for female education called the Malala fund, and wrote an account of her experience called “I am Malala”, a reference to her being able to step out of the shadows of fear from where she had been required to express herself.

This writer notes that journalism in Pakistan is rife with clever articulate men, many of whom soil their pants at the silent mouthing of the words ‘ISI’, keeping their pens safely capped as the squeeze their but cheeks together. Malala puts them to shame – so their resentful reactions are entirely understandable. The country would do well to produce more ‘normal useless types’ with the courage of their convictions than the many eloquent Pakistani voices (mainly male) who spout statist propaganda in the guise of truth.

Technology and business pages, this week, featured the face of Satya Nadella, half a world a way. He is the first person of South Asian origin to become CEO of a multinational billion dollar technology conglomerate, arguably making him one of the most powerful men in corporate America. Mr. Nadella’s appointment was lauded in India as though corporate America was honoring a son of the soil.

I am not sure what the qualifications for a good CEO are, these days, but clearly sensitivity and fair-mindedness are not high among them, that is if Mr. Nadella is judged to embody the norm. He made news this week with a statement on the compensation of female employees of Microsoft, specifically when to ask for a raise – never, in his view. He counselled a room full of women at an event commemorating women in computing to stay silent, wait, have faith in the system that rewards will come – eventually.

It is almost as though he was chanelling the housewife from Pakistan who said that the Nobel Committee should have waited 10 years to recognize Malala’s achievements.
But rather than interpreting or paraphrasing, it’s better to actually read what he said verbatim to Maria Klawe, President of Harvey Mudd College and Microsoft board member at the Grace Hopper Celebration of Women in Computing: 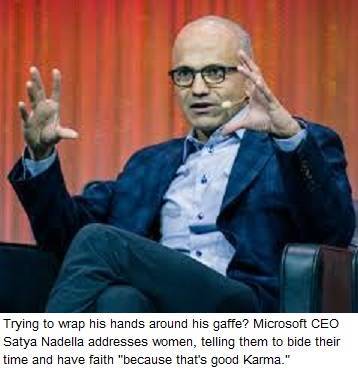 Satya Nadella: The thing that perhaps most influenced me in terms of how you look at the journey or a career…There was this guy whose name is Mike Naples who was President of Microsoft when I joined, and he has this saying that all HR systems are long-term efficient, short-term inefficient. And I thought that phrase just captured it. Which is…it’s not really about asking for the raise but knowing and having faith that the system will actually give you the right raises as you go long. And that I think might be one of the additional “superpowers,” that quite frankly, women who don’t ask for a raise have. Because that’s good karma. It will come back. Somebody’s going to know that’s the kind of person I want to trust. That’s the kind of person that I want to give more responsibility to. And in the long-term efficiency, things catch up. And I wonder whether taking the long-term approach helps solve for “Am I getting paid right?” Am I getting rewarded right?”

The irony of Nadella’s comments is that he may well have spurred more women to do the opposite of what he originally advised in the company he heads, causing management to deal with the politically thorny issue of whether or not to say ‘no’.

Still, it is telling that Mr. Nadella, surely having faced challenges as a person of colour climbing the ladder in the US business world, could deal so insensitively with a historically deprived group, doing the same. The egregiousness of his gaffe seemed to lie not only in the text itself but also in the fact that he was so obviously oblivious to just how horrendous a statement it was!

When they do negotiate, they are perceived to be ‘bitchy’ compared to men who are expected to be assertive. This can result in a backlash against them and it often does.

So, this week, we highlight the contrasts in the plight of women between the countries of haves and have-nots. While courageous young women like Malala must literally dodge bullets to get an education and speak up for their rights under oppressive male-dominated regimes, in the US, educated women, often having more advanced degrees than their male colleagues are told to keep quiet and be patient.

While the Nobel committee is to be lauded for having vision that clearly, Mr. Nadella lacks (and mind you, this ought to be a sought after characteristic of CEOs) the plight remains ever present in society regardless of where women live and work.

The manifestation of the challenges in The West is simply a lighter shade of the same darkness. However acute or mild it is judged to be in comparison, it is still oppression, telling women to keep quiet rather than to make waves.