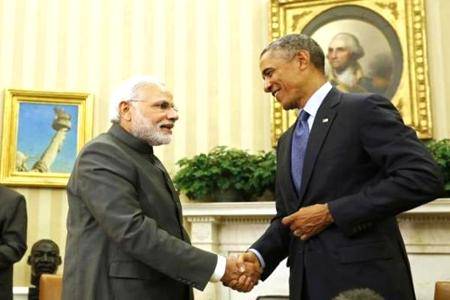 Indian Prime Minister Narendra Modi’s trip to the United States has been described in the Indian press in an array of clauses from ‘A great success’ to ‘disappointing’.

Reactions around the world are equally diverse but universally curious about the enigmatic former tea seller from Gujarat on whom a billion people have pinned their hopes for a brighter and more prosperous future after ten years of decline and disappointment under Mr. Modi’s predecessor.

Here is a brief round up of voices from around the world:

New York Times, Oct.1, 2014 – Narendra Modi Has Face Book Fans Here, Too: Mr. Modi’s Facebook Base is at some 172K fans is larger than all but 21 elected officials in The United States…Several American politicians benefited significantly from Mr. Modi’s presence in the USA. Those attending his Madison Square Gardens sell-out event received sizeable boosts on Twitter after posting pictures with him. Among them, Tusli Gabbard (Democrate – HawaII) , the first Hindu member of the House of Representatives got 767 new followers after posting a picture of herself with Mr. Modi.

The Washington Post, September 30th, 2014 – A renewed U.S.-India partnership for the 21st century – an unprecedented co-authored piece for the Washington Post from Barrack Obama and Narendra Modi. “Ties between the United States and India are rooted in the shared desire of our citizens for justice and equality. When Swami Vivekananda presented Hinduism as a world religion, he did so at the 1893 World’s Parliament of Religions in Chicago. When Martin Luther King Jr. sought to end discrimination and prejudice against African Americans, he was inspired by Mahatma Gandhi’s nonviolent teachings. Gandhiji himself drew upon the writings of Henry David Thoreau.”

The Washington Post, September 30th, 2014 – India’s new prime minister drinks only warm water at dinner with Obama. “For more than 30 years, Modi has been observing the annual nine-day religious fast called Navratri, an auspicious period in the Hindu calendar that also marks the coming of autumn. Modi was in the fifth day of his fast when he arrived on the Obamas’ doorstep Monday evening. He is staying at Blair House across the street.”

The Guardian, September 30th – Can Narendra Modi bring the solar power revolution to India? “As chief minister of Gujarat, Modi spurred companies to build more than 900MW of solar plant across the state in just a couple of years. Now, as prime minister, the question is whether he can repeat the feat across India, which receives more sunlight than any other country in the G20.”

The BBC, September 30th – Indian PM Narendra Modi meets Obama at White House ” Mr Modi gifted the president a copy of Gita, one of the most revered texts of Hinduism, a rare photo of Martin Luther King at Rajghat, the memorial of India’s independence leader Mahatma Gandhi, and a copy of a speech he gave in India”

Gulf News, October 1st – Pomp and pageantry as Obama meets with Modi “U.S. President Barack Obama and India’s Prime Minister Narendra Modi talk at the National Martin Luther King Memorial on the National Mall in Washington September 30, 2014. Obama and Modi said Tuesday that “it is time to set a new agenda” between their countries, addressing concerns that the world’s two largest democracies have grown apart.”

Aljazeera America, Sept. 29th – ‘Toilets before temples’: Indian-Americans awed by Modi tone and economics ‘“This event is a hallmark to show how emotionally bonded he is with the community here,” explained lead organizer Dr. Bharat Barai, an Indiana-based physician and longtime friend of Modi. Coordinated by the Indian American Community Foundation, which Barai described as a “nonreligious and nonpolitical organization,” 450 volunteer associations partnered to raise about $1.2 million from private donors and crowd-funding for venue rental and other costs.’

The Economist, September 29th – I give you Narendra Modi “At 11.45am precisely, a film shows a fantasy India of robots, billionaires’ houses and vast green fields. It meshes these images with shots of those who did not support, or probably would not have supported, Mr Modi: praying Muslims, and the two deceased heroes of India’s independence movement, Jawaharlal Nehru and Mahatma Gandhi. Modi claims ownership of all of India now, even his foes. After decades of political struggle, he has transcended politics. Next, in response to a meticulous cue, a handful of blinking American Congressmen, who have been flattered or press-ganged into appearing, go on stage. They get a cheer: this may be the only place in the disunited states of America where that happens. The national anthems are sung: the Star Spangled Banner, first and with care, then India’s, with abandon.”

The Huffington Post, September 30th. Narendra Modi: From Tea Seller to Prime Minister “The crowd applauded repeatedly — but they exploded when Modi commented, after calling for common sense basics like “a home for everyone by 2022” and toilets: “When people ask me for my big ideas, my grand vision, I remind them ‘I got here by selling a cup of tea.'” This kind of celebration of the log cabin to the White House story, ordinary in the US, is quite new to India, whose politics have been far more dynastic and top down.”

Slate, Sept. 30th – Mad About Modi “Many of Modi’s most loyal followers are indeed Indians and people of Indian origin living outside of India. This might strike you as contradictory: If these Modiphiles are such devoted Indian nationalists, why would they leave their native country to become cardiologists in Houston or financial engineers in Singapore? The reason is that until very recently, India has offered scant opportunities for its best and brightest. Many Indian émigrés are of the view that the best thing they can do for their country is to make something of themselves abroad, and to then spread their wealth and influence back home. By promising to make India a country they can be proud of, and a place where bright young Indians can make their fortunes, Modi tells these reluctant exiles exactly what they want to hear.”

The Global Times (China) September 28th – Modi’s US visit seeks to boost flagging ties “Modi, whose nearly 13-year rule as chief minister of Gujarat saw a remarkable turnaround in the state’s economy, infrastructure and people’s prosperity levels, was wooed actively by Washington early this year when it became clear that he was headed to become the leader of a nation of over 1.2 billion people. Modi has given enough indications that he will not allow the US’ past behavior towards him to cloud bilateral ties.”