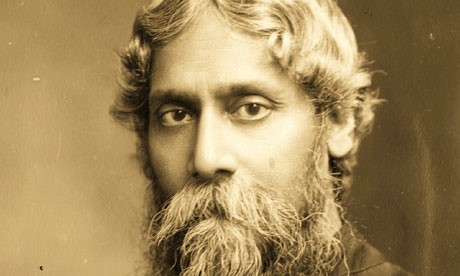 The ceremony marking 100 years of this event, began after a sombre inauguration of a historical exhibit on the occasion by Sharmila Tagore and the cultural program, which followed was emceed by renowned actor and orator Sathinath Mukhopadhyay.

This time, the dignitaries kept to a discussion of Rabindranath’s accomplishments. Dr. Duttagupta remarked on the relevance of Tagore in today’s world, his internationalism, his anti-nationalism, and his modern ideas. His counterpart at Rabindra-Bharati expounded on the unfortunate facts of how people in his home country, Bengal in particular, tried to minimize the accomplishment by saying that the award was won due to lobbying by Rabindranath, and that the Nobel Committee were impressed more by the translations and revisions, which were done by the Irish Poet W.B. Yeats, whose contributions to the adaptation both Rabindranath and he have acknowledged.  Harald Sandberg spoke briefly about Tagore’s impact on Sweden during his two trips there in the 1920s, his sense of how cultural exchange can improve relations between countries, at a time when ‘Cricket Diplomacy’ wold be regarded in the same breath as the mutterings and utterances of a fool.

Events moved at a break-neck pace and, within a year, he had won the Nobel Prize, to his own amazement. Those who say that this was due to lobbying efforts by Rabindranath are certainly ignorant of the nomination process – a secret one, in which certain academic institutions and cultural delegates are empowered to nominate.  The faculty at nominating institutions familiar with Tagore’s works in Europe were all British – and the British take on Tagore was ambivalent. 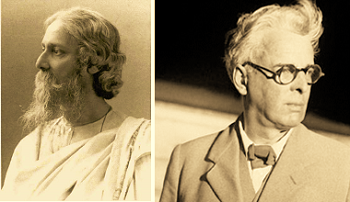 The British certainly found in him a more appealing figure for the natives to hail, certainly, than the revolutionary Bengalis, who were attempting to eject the British by force of arms. However, his stand opposing the division of Bengal in 1905 had made him persona non grata, and British Academia were active in a campaign to prevent India’s elite from attending Tagore’s school at Santiniketan, and inherited scenic property in rural Bengal.

In fact, Tagore was on the brink of closing the doors of his school when the prize money from the Nobel, funnelled into its coffers by Tagore breathed new life into it.

To the west, he embodied the best of what the East had to offer, and came to exemplify all that the West admired about the East. To some extent, Tagore played to this sentiment, becoming more and more a figure of exoticism and mystery to Western interlocutors. Yeats, who was once floored by Tagore’s poetry, referred to his later works as “sentimental rubbish” that was “tarnishing his reputation”. No doubt,

Unlike other Indian Nobel Prize Winners (Amartya Sen comes to mind, who ironically says Tagore was his ‘guru’ in as much as the term might be applied to his life) Rabindranath was not afraid to tell truth to the reigning monarchy.  When the British banned public gatherings and Brigadier General Dyer massacred some 379 Punjabis at Jalianwallah Bag (causing 1576 casualties in total) some five and a half years after he won the Nobel, Rabindranath travelled immediately from Santiniketan to Calcutta where he tried to organize a rally in protest. The Bengali establishment had been cowed by the draconian measures of the British, signifying that the ‘example’ that Dyer had tried to make of the peaceful Punjabis was working on some level across the breadth of the sub-continent.

Determined to something radical when others were too afraid, Rabindranath Tagore, already the first non-European to win the Nobel Prize, became the only man in history to renounce a Knighthood from the British Crown. Rabindranath, scion of landed gentry, the paradoxical mystic, whose austere words had placed nature above materialism, renunciation above wealth and power, had finally lived up to the spirit of Gitanjali. People could debate the import of his words, the worthiness of his of them in garnering him the most prestigious prize offered to a man of letters – but they could not deny his actions.

Today we remember that a mere medal alone did not make Rabindranath Tagore a great man. And, the amalgam of his beautiful words as well as his principled deeds, much more so than a gold Medallion awarded by the West, ought better be considered his enduring legacy.