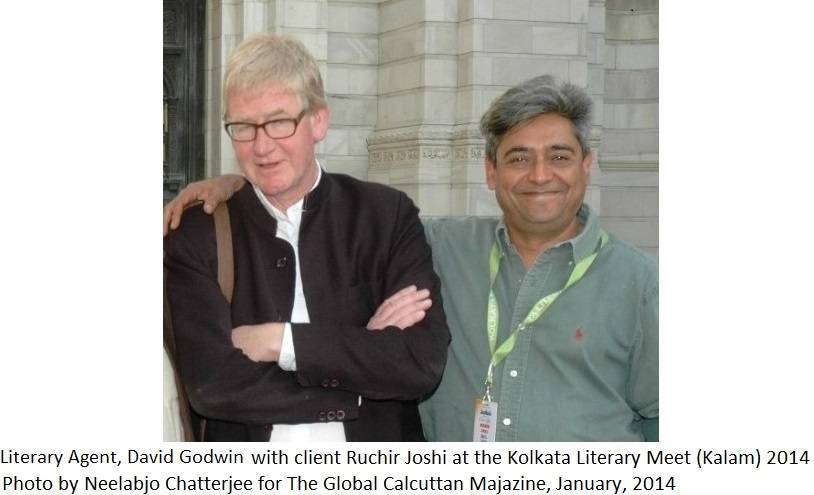 On the trail of David Godwin

I have always been a voracious reader since I first found myself seeking solace from a painful childhood in the insulating cocoon of my mind. As a writer, I read not only for the pleasure of it but also as a matter of necessity in much the same way in which a physician must stay up to date on recent treatment methods, advancements, drugs. I must admit, though, I am not familiar with the publishing world, lesser still with the agents that champion the words that combine to line the shelves of bookstores. It is, perhaps, no surprise, then that I first heard of David Godwin through a writing assignment, an interview with David Davidar, one of the pioneers of the modern publishing industry in India, now CEO of Aleph Books.

In the course of our interview, we discussed the author, Vikram Seth for whom Mr. Davidar was editor on his famous book A Suitable Boy. As an aside, I mentioned that, should the opportunity come my way, I would be happy to interview the acclaimed writer, perhaps when his sequel to the famous book came out. This conversation took place in January, 2013 when Mr. Seth’s book, A Suitable Girl, was due to come out later that year to be published by Penguin. He encouraged me to contact Mr. Seth’s agent – one, David Godwin, whose e-mail ID he wrote on the back of his own business card, mentioning that I should contact Mr. Godwin around the time of the launch of his client’s new book.

I put away the business card, and waited. Some months later, I read that Mr. Seth was nowhere near finished the book putting his 1.1 million Pound (nearly $2M) publishing deal in jeopardy. The deal was eventually scuttled, and Mr. Seth returned the advance, seemingly putting him into a publishing no-man’s land – for all but a few moments, his agent coming to his aid, polishing off a similar deal at another publisher. This was the first evidence to which I was exposed to the professional expertise of David Godwin.

It left a deep impression on me. I did some research on Mr. Godwin, and learned that Mr. Seth was not his only high profile client. From MAN Booker prize winners Arundhati Roy, Aravind Adiga, and Kiran Desai to historical witer, William Dalymple and rising stars like Tash Aw and Jeet Thayil as well as promising poets like Tishana Doshi.

If you haven’t already noticed the pattern, many of his writers are Indian: the cream of the crop, for David Godwin is bullish about Indian Writing, making it a point to come to India at least once a year.

It was during one of these trips, at the Kolkata Literary Meet (Kalam) that I met him, and ceased at his behest to call him Mr. Godwin. I had contacted him via e-mail to ask for that interview, which I had discussed with David Davidar. David had been busy travelling – and didn’t get back to me but I held out hope that I would connect with him at Kalam, where he and clients Vikram Seth and Ruchir Joshi were scheduled to appear. I was also a delegate, invited to moderate a session with Tash Aw, Anita Raghavan and Shyam Selvidurai. At the time, I was unaware that Tash was also a client of David’s.

Attending a pre-inaugural session featuring author Jhumpa Lahiri, I had showed up with two communications students who were trailing me from a local college. When we got there (on time but not particularly early) the place was already packed, standing room only, save the reserved section at the front. Loathe to do such things but already tired that day, I mentioned my delegate status to a known member of the organizing team, and she ushered me to a seat in the front, one across the aisle from a tall friendly British man, who introduced himself to me ‘Hi, I’m David Godwin,’ he said thrusting a hand out.
We shook hands, and I introduced myself. 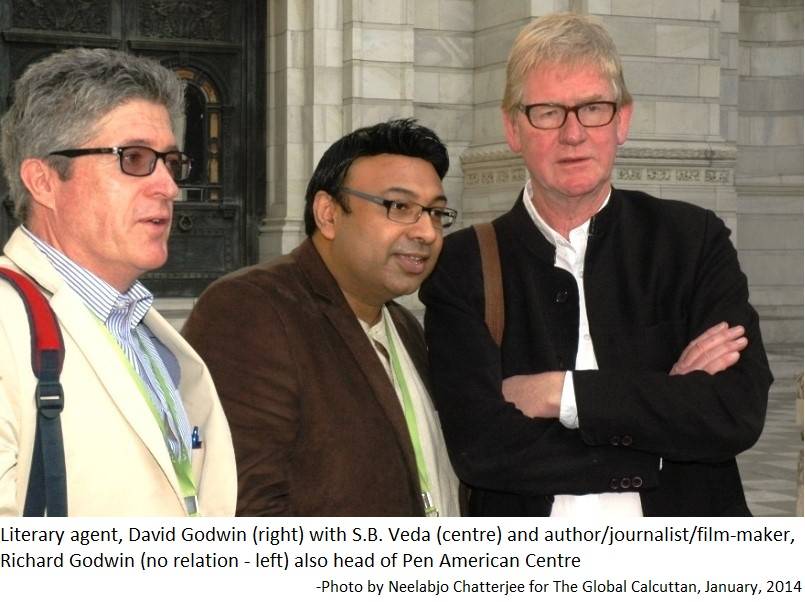 ‘Ah yes,’ said he, ‘I’d been meaning to get back to you’. The ensuing conversation led me not only to ask about Vikram but also to invite him to appear in our series ‘Calcutta Conversations.’ He did not hesitate to agree, and we set a time to meet on inauguration day.

It was nothing less than a serendipitous meeting, and he gave an illuminating interview both about his journey from publisher to agent, and about the publishing industry. It’s a must see for any would be writer. He spoke his role in the creative process and on putting a value on a book. And, he did arrange the interview with Vikram Seth, who was gracious enough to phone me when I was unavailable to meet him during his allotted press time.

I hope you enjoy the six part video interview, which can be found by clicking on the following link:
DAVID GODWIN INTERVIEW, “CALCUTTA CONVERSATIONS”, SATYAJIT RAY STUDIO, ILEAD SCHOOL OF COMMUNICATIONS & MEDIA SCIENCE

From Publisher to Agent

David was a publisher for many years, working at Heinemann, Seckers and then Jonathan Cape where he personally secured writers such as Graham Swift and Ben Okri.
The corporate world of publishing, however, didn’t agree with him.

‘I was a little irresponsible with the money, and had a problem with authority,’ he admits.

He is perhaps a bit hard on himself. His last publishing gig at Jonathan Cape was put in jeopardy when the American company, which acquired it decided it didn’t like David—his comportment did not fit into the corporate mold, and his style could not be neatly encompassed. They felt he was not well organized and, worse, he was on the side of the writers.

‘When I finally got fired from Cape, which was a great publishing house, I thought I ought to become an agent,’ he says.

‘There was nothing else I could do,’ he exclaims. ‘After being fired four times, the last with at a literary agency, I told my wife, we’ve got to start our own agency. So, we rented an office in a shipping agency, and called it David Godwin and Associates to make us look big but it was just me and phone!’

It was a huge risk. No longer drawing a salary, he knew well that he wouldn’t be paid unless he could sell a manuscript. Armed with only a phone, his contacts in publishing, his sense of taste and literary judgment, he set up shop. Whether by chance or fate, he was referred piece of work by publisher Pankaj Mishra. It was authored by a then unknown woman, Arundhati Roy. Thirty pages in, he knew he had to sign the author. ‘It was like a gift from the Gods,’ he exclaims.

He called her immediately, and his enthusiasm for the book was greeted by her with some skepticism, telling him to finish it before arranging to see her. He was not deterred, boarding a plane to India, two days later. She signed with him, and he secured her five hundred pounds in combined advances (later it was reported as around a million pounds – David doesn’t like to talk about money, so I didn’t ask him for the exact figure but, sufficed to say, it was substantial!)
Roy’s book, God of Small Things became a literary sensation, and won the coveted MAN Booker Prize during India’s fiftieth year of Independence. For David, it seems is no stranger to serendipity. Witinin two short years, David Godwin Associates had arrived.

Nearly twenty years later, the agency, based in Covent Garden, London and despite only having five members on staff, it is one of London’s leading agencies representing a diverse and impressive set of writers including booker prize winners, Aravind Adiga and Kiran Desai as well as publisher turned author, David Davidar, the acclaimed Ved Mehta as well as newcomers, Meena Kandasamy, Deepti Kapoor, and Tishani Doshi.

Asked what’s on the horizon in Indian literature, David replied, ‘Women – It’s the age of the Indian woman writer.’ An Indian woman had put his star into orbit; the power of the feminine, it seems is destined to bring it to new narrative worlds. It will surely be our delight to read the results of this celestial journey.