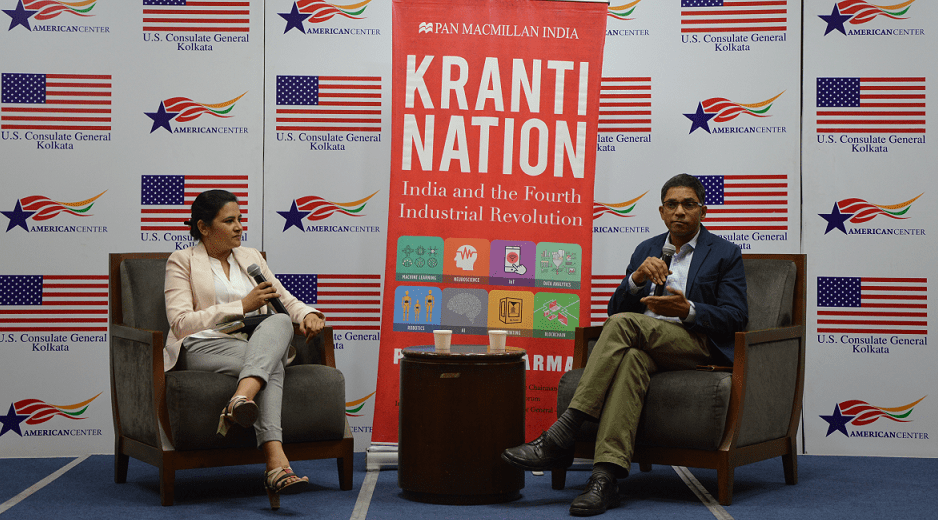 ‘Revolution’ at the American Center

The future is already here, according to Delhi-based author, columnist and futurist, Pranjal Sharma, who led a discussion at the American Center Kolkata on “The Fourth Industrial Revolution Transforming Business in India” on November 25th. Organized by the Pan Macmillan India and the US Consulate, the event was part book launch and part preview to the joint US-India Global Entrepreneurship Summit (GES), scheduled for November 28th-30th in Hyderabad.

The summit (the 8th annual installment) will highlight the theme, “Women First, Prosperity for All” to focus on supporting women entrepreneurs and fostering economic growth globally. It will be co-hosted by Ivanka Trump, Advisor to the President from the American side and Narendra Modi, Prime Minister of India from the Indian side.

The kind of integration that the GES promises is at the heart of Sharma’s book, Kranti Nation: India and the Fourth Industrial Revolution. And he delivered a provocative overview of it. The talk was followed by a Q&A moderated by Meghna Bhutoria, Founder/Director of MakersLoft, a company geared towards making a space for creative people to build, innovate, and invent.

Kranti, explained Sharma stands for revolution but it also means trajectory. His book and the talk around it was about the trajectory of the India’s economy based what Sharma’s colleague and mentor at the World Economic Forum, Professor Klaus Schwab has popularized as the Fourth Industrial Revolution.

Sharma is no stranger to writing about change. The former editor at Bloomberg/UTV and business presenter for Times Now cut his teeth writing about the disruptive change of economic liberalization in the nineteen nineties. A quarter of a century later, he is writing about another no less profound period of transformation.

Most are familiar with the invention of the steam engine in the late 18th century, ushering in the age of mechanization that released people from dependency on domesticated animals for production. This paradigm shifting change is known as the First Industrial Revolution. The second revolution took place around a hundred years later when the availability of electrical energy coupled with division of labour made it possible to mass produce items on an assembly line – the prototype of the modern factory. The third such transformation occurred when computing power enabled automation in the production process. The latest or Fourth Industrial Revolution, which some have said is an extension of the third, involves the integration of various technologies combined with artificial intelligence to enable inanimate objects to communicate resulting in a profound acceleration in progress. 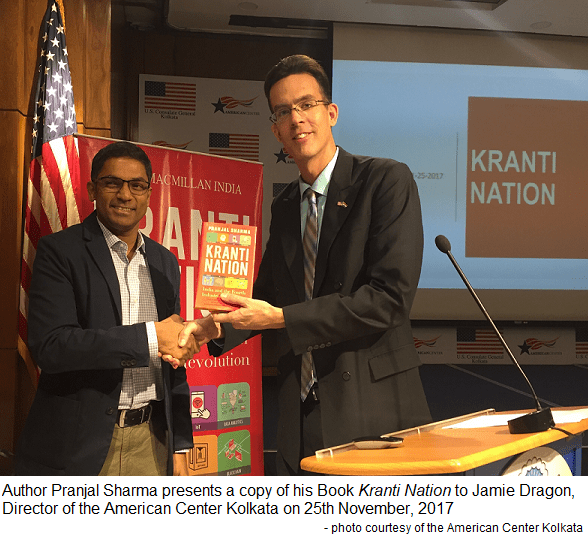 These disruptive waves stand not only to revolutionize the way goods are produced and distributed but also how we utilize them. There is a potentially darker side, though. Schwab refers to the work of economists like Erik Brynjolfsson and Andrew McAfee, who predict mass unemployment resulting from such massive shifts. “As automation substitutes for labor across the entire economy, the net displacement of workers by machines might exacerbate the gap between returns to capital and returns to labor,” writes Schwab. On the other hand, he posits that the displacement may result in a net gain in safer and more rewarding jobs.

Sharma accepts both possibilities. “It is not for me to say the revolution is ‘good or bad’ per se,” he said in an exclusive interview to this magazine (to be published alongside a review of Kranti Nation). “Rather, my book chronicles how these changes are already occurring in the country (India)”

“It is my hope that with more awareness of what is going on, businesses, government, and the population at large will not only adjust but also embrace the Fourth Industrial Revolution so it can best impact people’s lives,” Sharma added.

From smart lighting by Philips with sensors that reveal where bulbs are blown and even where employees might be located in a room – to internet-based platforms by Cargill to help farmers get the best prices for their crops – to an artificially intelligent e-designer named Artie who designs tee-shirts for Myntra, Sharma’s book is a chronicle of innovation that is well underway in the nation.

Bhutoria, whose workshop at MakersLoft features 3-D printing was quick to point out that when a “famous politician’s nephew with heart trouble, he got a stent that was manufactured using 3-D printing.”

Sharma also mentioned the more obvious ways in which our lives have been impacted:

“Remember the old days when a program was broadcast on television – and you had to watch it at that given time? Now, I watch what I want when I want, online,” said Sharma. “In fact, the way your magazine integrates different media forms is something that was uncommon a decade ago, unthinkable two decades ago. But it is increasingly becoming the norm.”

Unlike other revolutions, the Fourth Industrial Revolution or ‘4IR’ as it has come to be known is a quiet one. “It’s happening right under our noses,” said Sharma.

It is enough to put one in mind of the American jazz poet, Gill Scott Heron. “The revolution will not be televised,” he wrote and belted out in 1970. Indeed…neither in America nor in India.

The revolution is happening now, and Kranti Nation chronicles the how.