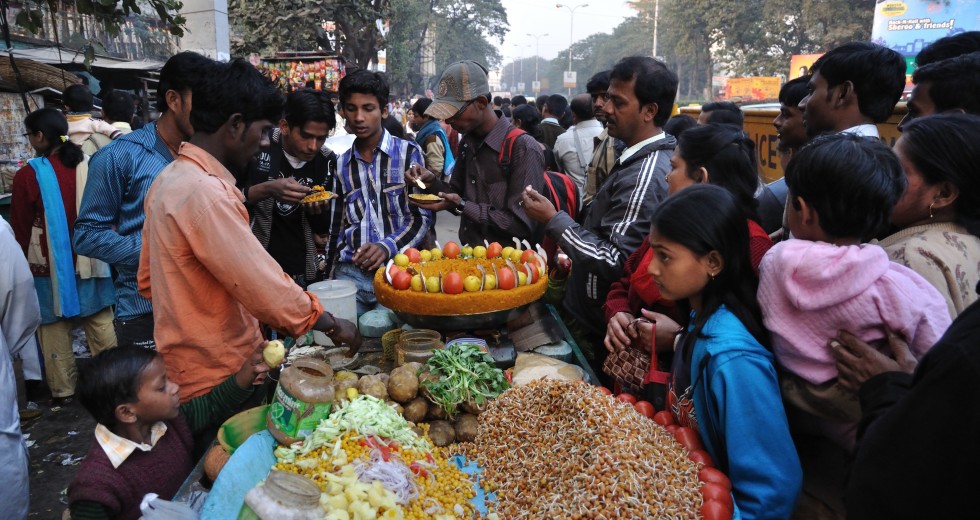 However, she suggested dodging Delhi belly after eating street food in India could vary from person to person and that one should follow their own instincts.

Her latest book, launched earlier this year at the Australian High Commission in New Delhi, is the first comprehensive documentation of Indian regional food and could be read as a literary reference work on Indian food history and culture.

The book, a result of four years of extensive research, has illustrated evolution and development of regional cuisines across India.

Elaborating on Indian food cuisine and culture, O’Brien said Indian regional food was most complex and offered a diverse cuisine unlike known to outside world.

“Indian food is laden with history, culture, religion, economic conditions as well as weather,” she said.

Even trade affected the development of Indian cuisines, she said adding ‘In Madurai, the Chettinad cuisine has expensive spices like fennel, coriander, clove, cinnamon which reflected that people were wealthy and trade happened, O’Brien said.

“In desert like Kutch, there was an extensive use of millet as it was locally grown and was fast to grow so the Kutchi cuisine developed with very limited ingredients which were easily available there,” she said.

“People of Kutch were mainly animal herders so they produced and used dairy products like Ghee which also suited the climatic conditions,” she said.
O’Brien said that there were many regional sweet dishes where traces of Middle eastern origin could be found, apparently from Arab traders who came into India, she cited.

“There are different varieties of Halwa similar to Turkish delight which probably evolved because of Arab traders there,” she said.

O’Brien said despite enormous variety of Indian food across all four corners, outside India including in Australia there was a very limited knowledge about it.

“Indian Restaurants and eateries overseas have been mostly serving similar dishes like Chicken tikka or Spicy curries that has reflected that India had a homogeneous national cuisine,” O’Brien said.

While not specifically mentioned by O’Brien, street food is scrumptious part of cuisine in Calcutta; and while fried foods are to be avoided for those with arterial disease, high cholesterol, hypertension, and other disorders, it is, at least safe for the stomach. We have yet to encounter a complaint from a visitor to the city, who, assuming the filling is made from ingredients that are not rancid, has become sick from eating hot samosas, fried fish (unless the fish is old) or Nimki or other fried snacks.

That said, street cuisine is hardly limited to the fried variety, other foods such Kabli Chola, Channa chips, Bhel Puri, are available, which are not unhealthy in the least. Generally, uncooked produce such as salad is problematic in such instances due to problems with the water used for washing. However, a liberal dousing with freshly squeezed lime juice, which is a normal accompaniment, can kill much of the bad bacteria, due to the high ascorbic acid content.

The food is also relatively cheap, and provides an alternative to high priced café’s. For instance, a soggy microwave-reheated samosa and tea or cofee at Café Cofee Day will typically cost over Rs. 100. At a Chai Dhabha, tea (mind you, you won’t get premium leaf – but it’s more satisfying improperly brewed or stored leaf) and a tasty hot Samosa will cost around 20-30 rupees, max – and one may add other snacks such as Kachori (puri pastry filled with peas) Nimki (fried graham flower chips), and pakoras (vegetables fried in a spicy batter) and still be within the price of a single samosa and hot drink at a Café Coffee Day.

The street food is of a wide range, and people consume it at any time of day, beginning with the breakfast consumed by Students and office workers such as toast and masala omelette or puri sabji. For early risers, there is an authentic Chinese breakfast at Tiriti market, near Lal Bazaar Police Station, consisting of soups, vegetables, noodles, etc., or for those who are hungry, dumplings meat balls, boiled and fried momos and other bites. Don’t look for American Chop Suey, though!

And for lunch, one can start with vegetable soup, and end a four to five course meal, with sweets. Roti, made from whole wheat flower is healthy, and contains fiber; these range from: Roomali Rotis, Tandoori Rotis (baked in clay Tandoor ovens), classic Chapatis, and Naan bread. These are consumed with delicious vegetarian and meat preparations. 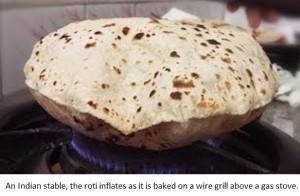 A quick lunch can be had at a roll stand. Rolls basically consist of barbecued meat, chicken or mutton, wrapped in a Paratha, sometimes a Chapati. While Parathas aren’t the healthiest fare, being heated on a skillet containing some oil, they are typically not greasy – and those vendors, which have access to a Tandoor oven can make Laccha Paratha, which is baked in the oven without oil. Rolls can be very tasty, and quickly prepared and consumed: the equivalent of the hot-dog stand in North America but way healthier and cheaper than the average Frankfurter in a bun. Rolls are freshly prepared, and you get them hot, so stomach problems are not generally an issue for those preferring this option (though if you’re a visitor to India, again, avoid the salad…go for just the spiced meat with lime and chilies, if you like added heat). 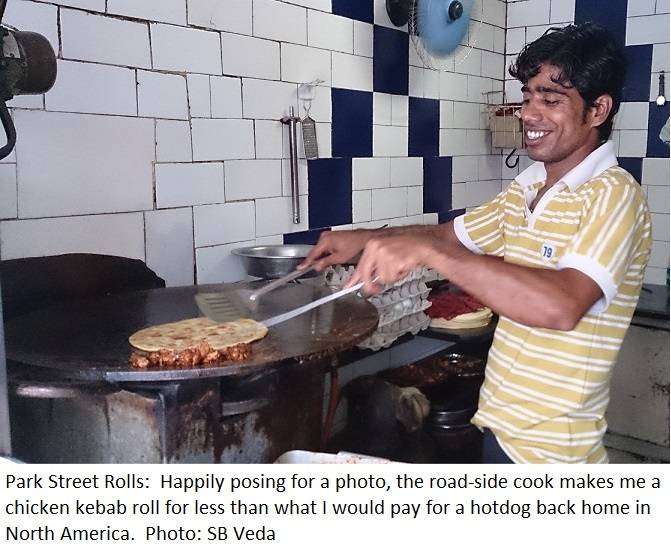 One of the most conspicuous food vendors are the Gandhitopi-clad sellers of chana jor garam – a type pressed baked chip snack, made from chickpea. Carrying bamboo baskets, they offer a Bombay-style mixture of chana , sprinkled with chilli powder and lime. It is both flavourful, and healthy, containing fibre and no oil. These vendors are easily found around the Park Street – Camac Street Area but also are present elsewhere. Look for the white hat – this is , no danger of running into Arvind Kejriwal.

The famous street food joints are located in central Calcutta, especially in the BBD Bagh, Dalhousie area, with the maximum number of central and state government offices, and banking and corporate establishments.

Long stretches on Theatre Road, Russell Street, Lord Sinha Road, Camac Street are famous for paw-bhaji and moong dal vadas . Calcuttans visiting the downtown areas of Esplanade or Chowringhee never forget to visit Dacres Lane. It has some of the best roadside food stalls in the city.

The latest entrants on the street stalls are the Tibetan delicacies- Momo and Thukpa. Momo is a type of dumpling from Tibet. It is similar to Mongolian Buuz and Chinese Jiaozi. Though the filling in Momo is traditionally done with yak meat, Calcuttans have learnt to replace yak meat with chicken and vegetables. 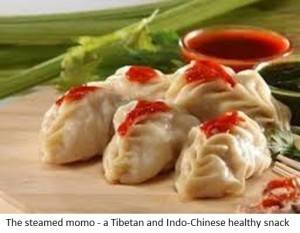 Similarly, Thukpa is a Tibetan noodle soup, usually served with meat. It is popular in Tibet, Bhutan, Nepal, and in the Himalayan ranges in India.

Both vegetarian and chicken Thukpas are in high demand in Calcutta. In fact some of the Tibetan refugee families sustain themselves on these stalls. 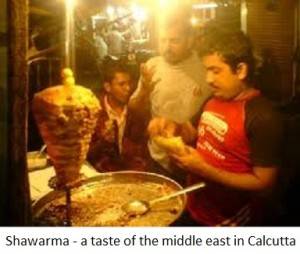 As the city has increasingly become a mosaic of cultures, city dwellers have shown a strong affinity for trying out world cuisine. Recently, the Shawarma has made it to the city: strips of chicken grilled by an electric heater, cut and placed in a wrap of Pita bread with or without salad and garlic sauce or Hummus. The grilling process causes the fat to drip off the meat, and the Pita is warmed on a heater, without oil. The garlic sauce contains the fat, so if one goes easy on it or excludes it, this is quite a healthy meal. Lebanese eateries are multiplying across the city’s landscape but in our opinion, the best Shawarma can be found at the Spencer’s Food Court in the Basement of South City Mall but if you want it off the street, just go to the corner of Rashbehari Avenue and Sarat Bose Road near Zeeshan. 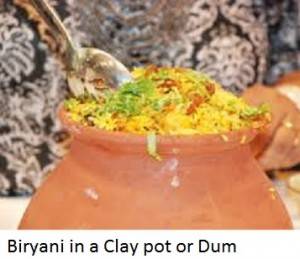 This, of course, brings us to Biryani, which is among the most flavourful in India. The line-ups at eateries at Park Circus in the evenings provide ample evidence of their popularity. Biryani is the only variety to contain potato and, sometimes, egg owing to restrictions placed on the proportion of meet authorized by the ruling Nawabs of Bengal when the state fell under Mughal suzerainty. The result added variety to the preparation, and made Biryani a signature dish for the city.

No review of street food is compete without mentioning Bengali Sweets:

There has always been a debate over whether Rasgulla or Roshogolla – the king of sweets in India – originated in Orissa or Calcutta.

Made from balls of chhana (cottage cheese) and semolina dough, Roshogolla is a must for every occasion in West Bengal, be it a wedding, or any other social event. In any case, sweets occupy an important place in the everyday diet of Bengalis. 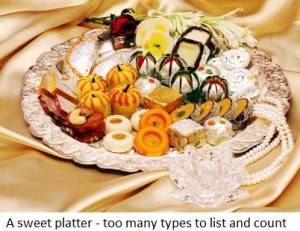 The confectionery industry has always flourished because of its close association with social events. Similar to Roshogolla in popularity is the Bengali sweet Sandesh, which has witnessed many innovations at the hands of the famous confectioners of West Bengal.

More than three centuries since the birth of the industry, competition and changing tastes have helped invent many new sweets, with the Bengali preparations coming to enjoy their own place in the global confectionery industry.

The innovative sweet chefs of Calcutta surprised everyone when they made live-sized models of FIFA World Cup heroes- Ronaldo and Messi. Not recommended nourishment before playing a match, we imagine!

Sandesh is a staple of Bengali deserts but foodies savor it most during winter season when Date Molasses or Nalen Gur is available. The Nalen Gur Sandesh is sweetened with this syrup, and there is a variety called “Jal Bhara”, which has a liquid center of Nalen Gur.

One cannot forget Mishty Dahi or sweet yogurt in the mix. These days, vendors use shortening or Dalda in its preparation, which is very bad for the heart but the good news is that the fat is a light layer, which floats to the top and congeals, so one can easily scoop the top layer off, and eat the curd on the inside of the clay container. That said, most Calcuttans will say they love to eat the top layer. What can we say: this is not city for the Health Nut.