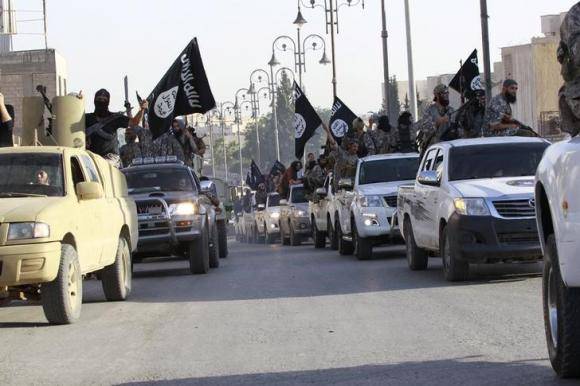 Months before they took control of the Iraqi city of Mosul in June, Islamic State militants were already busy collecting money to finance their campaign of setting up a 7th century-style caliphate.

The owner of a Mosul grocery store recounted how, when he hesitated to pay, militants exploded a bomb outside his shop as a warning. “If a person still refused, they kidnapped him and asked his family to pay ransom,” he said.

The shopkeeper, who declined to be identified out of concern for his safety, said he had paid the militants $100 a month six or seven times this year.

In return, he was given a receipt that says: “Received from Mr. …., the amount of …., as support to the Mujahideen.”

The shop keeper’s tale illustrates how Islamic State has long been systematically collecting funds for a land grab that already includes a stretch of northern Iraq and Syria. Another Mosul worker corroborated the account of IS tactics.

“The tax system was well-organized. They took money from small merchants, petrol station owners, generator owners, small factories, big companies, even pharmacists and doctors,” said the shop owner who, out of frustration and fear, closed his store and is now trying to make a living as a taxi driver.

Learning from their previous incarnation as the Islamic State of Iraq, when they received money from foreign fighters, Islamic State has almost weaned itself off private funds from sympathetic individual donors in the Gulf. Such money flows have come under increased scrutiny from the U.S. Treasury.

Instead the group has formalized a system of internal financing that includes an Islamic form of taxation, looting and most significantly, oil sales, to run their ‘state’ effectively.

This suggests it will be harder to cut the group’s access to the local funding that is fuelling its control of territory and strengthening its threat to the Middle East and the West.

Nevertheless, financing from Gulf donors may prove more critical in months to come, if U.S. President Barack Obama’s mission to “degrade and destroy” the group succeeds and the group loses territory and finds itself looking abroad for funds.

In the eastern Syrian city of Mayadin, an Islamic State supporter who goes by the name of Abu Hamza al-Masri, said the militants had set up checkpoints in the last few months demanding money from passing cars and trucks. The money purportedly goes into a ‘zakat’ or ‘alms’ fund, but Abu Hamza admitted some sums go to pay bonuses or salaries of fighters.

“Passengers are asked to open their wallets … in some instances they are threatened at gunpoint if they resist,” said another Syrian secular activist in Deir ez-Zor contacted by Reuters via Whatsapp.

But extortion is not Islamic State’s top money-spinner.

Analysts and activists say the majority of the group’s money comes from oil sales to local traders from wells under Islamic State control.

Luay Al-Khatteeb, a visiting fellow at the Brookings Doha Center who has done extensive research into Islamic State’s oil smuggling, says the group now has access to five oilfields in Iraq, each of which have between 40 to 70 oil wells.

“They deal with a sophisticated network of middle men, some of whom are affiliated with the (Iraqi) oil companies. They have to pay various checkpoints to move around all these oil convoys and specifically to export the oil to Turkey,” Khatteeb said.

“It is estimated that now, after recent territory losses, they can produce give or take 25,000 bpd, easily getting them about $1.2 million a day, on and off, even if they sell at a discount price of $25-$60 a barrel,” Khatteeb said.

This volume of oil production would be on par with a small offshore field on the north slope of Alaska.

A high-level Iraqi security official put the number of oilfields under the group’s control at four, with a fifth in contest between them and Kurdish peshmerga forces.

The group appears to have chosen areas of conquest carefully, with an eye to funding.

In the Syrian province of Raqqa, a stronghold of the group, the militants made sure they could effectively manage the area before moving on to conquer territory across the border in Iraq. They moved into Fallujah in Iraq’s Anbar province in early 2014, before reaching Mosul in June, a major urban center.

“It’s about controlling financial nodes. It’s controlling commercial centres, it’s controlling roads for checkpoints and there’s no surprise in that, because there’s significant value in that control. And the more finance you earn, the more you can develop. It’s a reinforcing circuit,” said Tom Keatinge, a finance and security analyst at the Royal United Services Institute (RUSI).

“There’s no point in controlling acres of desert. You want to control the financial nodes so that you can continue to expand. You don’t want to spread yourself too thin financially before you can operate effectively in an expanded area.”

The report, “Bombers, Bank Accounts and Bleedout”, said the “financial reports and receipts in the Sinjar documents show that the Islamic State of Iraq relied on three sources of funding: transfers from other leaders in al Qaeda in Iraq, money foreign suicide bombers brought with them and fundraising from local Iraqis.” The study said it was unclear from the documents whether the funds from locals were given voluntarily.

The bureaucratic obsession with accounting proved ironic – while it helped the group track funds, the documents, once in the hands of the U.S. military, helped Washington understand how the financing worked – from the operatives who moved money, to the ones who donated money, to how the money was spent.

One lesson learned, the Sinjar documents show, was the need for more reliable financing, especially with countries trying harder to disrupt the flow of funds, Keatinge said.

“If you have a sophisticated understanding of financial management like Islamic State or al Shabaab in Somalia, you know very well that relying on diaspora or private donations or funds that can be disrupted by the international community is a risky way to go,” said Keatinge.

By its own admission, Washington realises funds from outside donors are not as significant a threat as their self-financing methods, but the United States and its allies have been slow to move to cut those sources off.

“(IS) receives some money from outside donors, but that pales in comparison to their self funding through criminal and terrorist activities,” a senior State Department official said.

Ransoms from kidnappings do not seem to compete with oil sales, and not much is reliably known about the amounts they have received. ABC News reported that one U.S. hostage held by Islamic State is a 26-year-old female aid worker, for whom the group has demanded $6.6 million in ransom.

British Prime Minister David Cameron told parliament he had no doubt that tens of millions of pounds of ransom payments were going to Islamic State militants in Syria and Iraq.

Focus, a German magazine said in April that France paid $18 million for the release of four French hostages who had been held by Islamic State, citing NATO sources in Brussels.

French officials say the French state does not pay ransoms.

Then there is crime. IS raided the central bank in Mosul and reportedly seized substantial sums of money, though the figures are disputed. The group apparently allows Iraqis in Mosul to withdraw 10 percent of their bank deposits and give 5 percent of the withdrawn amount, as zakat, or Islamic alms.

WHAT CAN BE DONE

Kuwait has been one of the biggest humanitarian donors to Syrian refugees through the United Nations. It has also struggled to control unofficial fund-raising for opposition groups in Syria by private individuals.

“Whomever has been identified by the United Nations as a terrorist, we will be implementing our law on them,” he said.

Washington has moved to cut off sources of private donations. Last month it imposed sanctions on three men it said funnelled money from Kuwait to Islamic militant groups in Iraq and Syria. Kuwait briefly detained two of the men, both of whom are prominent clerics.

“If I were the Chief Financial Officer of IS or ISIS as it was then, I would be watching that development very closely. Because if I were receiving money from the Gulf states, at that point I for sure knew that it would get harder,” said Keatinge.

In the end, squeezing the group’s finances will involve a mixture of intelligence and force. Ending the group’s control of a given area using military might would remove its ability to raise local taxes, for example. Tracking smuggling routes or Gulf donors, in contrast, would involve local informants.

Khatteeb, who is also the director of the Iraq Energy Institute, says Turkey must clamp down on oil smuggling routes through southern Turkey. This would dent a revenue stream Islamic State has used to fund a significant recruitment drive.

“Turkish authorities (need) to really pay attention in closing down these markets, put more work in intelligence and enforce the rule of law.”

In an op-ed last month published in the New York Times Patrick Johnston and Benjamin Bahney of the RAND Corporation argued that strategies that focused on sanctioning international financial activities were unlikely to be effective.

The authors say that “the terrorist group’s bookkeepers, its oil business and cash holdings” should be the targets of greater intelligence and scrutiny to help “disrupt ISIS’s financing and provide additional intelligence on its inner workings.”

Johnston told Reuters that even with the rapid expansion of Islamic State and its need to pay a larger number of recruits, the group could still make an estimated $100-$200 million surplus this year, given the amount of money it is making.

“They’re making more money, they have less opposition militarily … the question is what are they going to do with it?”