To Roam in Ruins: India-Land of Gods – A Review 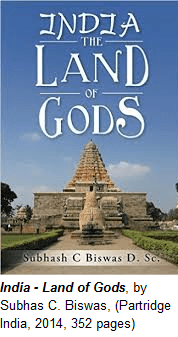 As JRR Tolkien rightly said ‘ Not All Who Wander Are Lost’. This story on endless travel and quest for the unknown is well-knitted in Subhash C. Biswas’ book, India – The Land of Gods. The book reflects an aimless journey to discover the self and for the love of travel.

Though a travelogue, it is written as a fictional story with Godadhar , the protagonist who is a doctor practicing in Canada having decided to travel back to his heritage country in India to explore different pre-historical structures of various locations in Northern India. Starting from The Taj Mahal to Fatehpur sikhri to various other adjoining locations in Northern India. The story is as much about a traveller’s experience discovering new places as a quest to connect with one’s roots, one’s ancestors and the significance of ‘India,The land of Gods.’

Life changes and so has Godadhar as well as those he formed his inner circle as a boy. He finds himself restless in Calcutta and life among his loved ones seems prosaic when the bug of travelling pricks his skin. Mr. Biswas has subtly explained this message in Godadhar’s zeal throughout the entire book as he explores historical structures in each city while travelling in Delhi, Lucknow, Kolkata, Orissa etc with restless enthusiasm. Each city leaves prominent mark in his uncharted guide book and manifest with quiet eloquence on page afer page of his story, his fellow travellers, guides and even the drivers contributing compellingly to its composition. The author has also wittily ornamented the book by emedding dialogue between Godadhar and his wife , Kamalika throughout, who more or less maintains different opinions on his agendas and guidelines of his travel, creating an undercurrent of humour throughout their adventures.

Starting from the capital New Delhi and the exotic Himalayan towns of Haridwar and Rishikesh, the travel continues to the colourful state of Orissa and then to the historical wonders and the magnificent sites of Karnataka and finally to the fascinating state of Tamil Nadu that gleams with vibrant spirituality around its countless temples, the reader will experience it while reading the book and will take a virtual trip to these spiritual locations. The detailed archaeological and historical facts behind these magnificent heritages has soberly been highlighted in each of Godadhar’s travel destinations. The author has also added another flare in the book by smartly jotting down moments of embarrassments, humour, awe, surprises. And these make the narratative all the more readable. The scholarly description of each structures avidly provided in the encounters such as with Underground Shiva temple, Hazra Rama temple, Taj Mahal, Akshardham etc., gives the reader a quality and depth of the author’s research.

A common pitfall for first-time travel writers is to report visits in encyclopaedic detail, with the result reading more like a reference manual than a travel memoir. Biswas attempts to employ a narrative style and use of fictional characters as devices to convey his own experiences while maintaining ample historical, geographical and archaeological detail. While he aptly weaves together the tapestry of his experiences in a way that is informative, the narrative didn’t really work for this reviewer. I found it lacking in a certain novelistic quality, and in this the author seems to be stretching. It may have been more effective to write the travel pieces from his own perspective as a kind of memoir. Surely Biswas has had an interesting life and could offer anecdotes and contextual experience to round out the descriptions of places, people, monuments, etc. Inventing fictional characters whom we don’t particularly care about gets in the way of the travelogue at times.

That said. the prose is simple and flows. Thankfully, Biswas doesn’t try to get too flowery in his use of language. The book is not exactly intended to be literary as in the ilk of Pico Iyer or William Dalrymple work nor is it strictly a ‘what to do’ type handbook of the Lonely Planet variety. Some might see the ambiguity as a shortcoming but in the opinion of this reviewer, the book stands on its own and should be recognized for having its own place in the genre.

The title, however, is a bit misleading: it lures the reader into expecting to be led through India’s mythological past, the stories of her deities and how these tales relate to the the land, places, monuments and people. In fact, one becomes a party to a tour with Godadhar and wife, which includes both the mythological and the material as well as their interaction and banter – which is can border the mundane. While promising to be a spiritual adventure (and to be sure there are elements that live up to the billing) at times we feel like we’re simply an observer on a vacation. Those expecting the former or wanting to learn about Hinduism through the contours of India’s landscape, the architecture of her buildings, the cracks in her Earth, are expecting too much.

There is also an issue with the editing, which is something of a problematic area in self-published books. Biswsas’ publisher, Partridge being a strategic partnership between PenguinRandomhouse and Author Solutions LLC to support the self-publishing goals of authors, churns out books like this one on an assembly line. Their web-site says they employ professional copy-editors to polish manuscripts into high quality literary products but, we have seen major publishers in India have editing issues, much less a supported self-publishing division (also based in India). And, a note to would-be authors who wish to self-publish: ultimately you are responsible for the quality of the content despite promises of high quality editing services. So, supported self-publishing houses offer solid but basic service. The rest is really up to the author. Let’s remember: self-published books can be very successful as we’ve seen with Amish Tripathi’s first novel and the E.L. James phenomenon.

Despite some minor issues outlined above, Biswas’ book offers both enjoyment and information for both for those wanting to escape to places visited by Biswas’ protagonist and for the traveller who wishes to experience India’s past, mythological and medieval, through the great monuments which have survived the ages and cover her vast landscape. in this, Biswas has given us a sound first effort; if he follows it up, we hope he does so in his own voice, which surely should be reflective of a vast experience both in India and abroad.