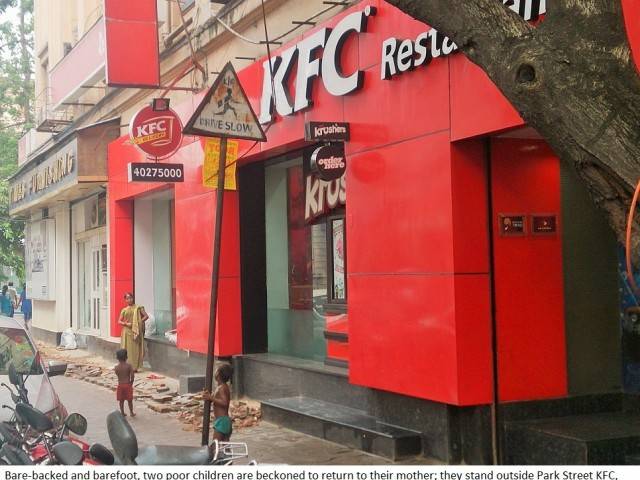 By S.B. Veda with inputs from staff

CALCUTTA – When the famous slogan ‘Garibi Hatao’ or ‘Remove Poverty’ helped win the Indian General Election for Indira Gandhi’s Congress party in 1971 – a clever response to her opponents cries of ‘Indira Hatao’ or remove Indira, her son Rajiv used it again. And, the next generation went back to the well to help defeat an incumbent NDA government that presided over an unprecedented period of economic growth.

Despite being recycled and repackaged by populist politicians since 1971, India remains a country deeply mired in economic disparity, even though official estimates put only 22% below the poverty line. For those living above it, life continues to be a struggle with problems of child malnutrition, inadequate healthcare, unsafe drinking water and lack of sanitation among the most pressing challenges being faced.

Interestingly, after successive governments have failed to stem the tide of these fundamental problems, attempts to reduce poverty by changing its definition were undertaken principally by the party of the Indira Gandhi and her heirs.

However, the under the new NDA government, India appears to be taking a fresh look at the poverty line, perhaps learning from their electoral defeat in 2000 that, it is not enough to improve economic conditions among the middle class and wealthy – they cannot ignore the poor when, in real terms, they comprise a significant component of the electorate.

In fact, last month a government-appointed committee proposed a new formula. If applied, nearly 30% of India’s 1.2 billion people would be classified as poor, up from 22% now, an increase of 94 million people.

Decades of disagreement over how to measure the poor in countries around the world are suggestive of what a daunting exercise this is, and that there is something within the state of being poor that mere numbers fail to capture.

That said, devising a fair poverty definition matters significantly for India if the problems outlined above are to be tackled. India’s era of fast growth has been dogged by questions about what the country owes its least fortunate and about how broadly the benefits of newfound prosperity are being shared.

The world’s best-known poverty line is the World Bank’s threshold of $1.25 a day, which is based on an average of the poorest countries’ national poverty lines. A United Nations report this month concluded that the proportion of the world’s population living on less than that amount halved between 1990 and 2010.

One-third of the world’s 1.2 billion extremely poor are in India, but even there, progress has been enormous.
The value of the World Bank line lies in its being a common yardstick. It doesn’t claim to be a precise assessment of the amount of money it takes to avoid destitution in every country.
Still, some economists argue the world’s neediest are ill-served by focusing on an income level that still amounts to penury.

The $1.25 line has “defined development down,” says Lant Pritchett, a Harvard economist who has worked for the World Bank in India and Indonesia. 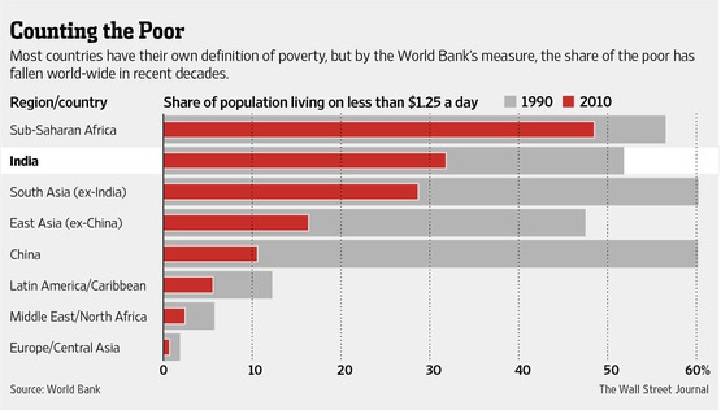 In addition to the cost of food, the new formula adds the median monthly expenditure, in a government survey of 100,000 households, on four “essential” goods: education, clothing, shelter and transportation. An additional amount, for all other spending, is tacked on.

So, according to the new definition, if one earns less than 972 rupees a month in rural areas or 1,407 rupees a month in cities than one is poor, officially speaking. At market exchange rates, that is about $US16 and $US23, respectively. The current thresholds are $US14 and $US17.

Those amounts go farther in India than in the U.S., but even in India’s rural hinterland, making it above either of these lines doesn’t guarantee much more than a wretched existence. In 2011, India’s Supreme Court asked the government to re-examine its methodology because the poverty threshold was being used to determine eligibility for certain entitlements. How, the justices asked, could someone living on 30 cents a day not be considered poor? The government eventually delinked India’s food-welfare program from the poverty line.

The new report’s higher overall threshold could help forestall more such disputes, even if it still tries to stipulate what a poor family needs. Anu Madgavkar, an economist with the McKinsey Global Institute, defends the idea of governments setting poverty standards on grounds that it helps quantify the cost of bridging the gap between rich and poor.

“The benefit of the line is to shape aspirations and government policies,” she said.

In his 2013 book “The Great Escape,” the Princeton economist Angus Deaton argues that poverty measurement is ultimately a question of democratic consensus, not scientific calibration—a continuing exercise based on what is acceptable to policy makers and the public, including the poor themselves.

“The truth is that we have little idea what we are doing, and it is certainly a mistake to let anything important depend on such numbers,” Mr. Deaton writes.

Child Malnutrition Still A Serious Problem – But Not Necessarily From Starvation

Making waters murkier is the correlation between poverty and symptoms of impoverishment – cause and effect is not always clear. Take child malnutrition: what is clear is that it is a serious problem, which persists to date as exemplified by a recent study by UNICEF, which looked at malnourishment in Indian children below the age of 5, with an estimated 7.4 million babies that were born in the sample year with low birth weights. The survey reported 17,656 women (39 percent), out of 45,325, were underweight at the time of delivery, 40 percent of urban children in 6-59 month category were shorter than world standards (stunted), and 33 percent were underweight than expected weight to their height per world standards (undernourished).

While the above may be in evidence, it is far from clear whether this is due to only to poverty. It may well be that the main cause for this malnourishment may well lie in dietary habit.

“It is very clear that in Africa (malnutrition) is a result of absolute poverty. They are starving… In our case, to me it seems it is about eating and feeding practices… Most children we measured have never been hungry, but what the child is eating is almost all carbohydrate,” says Mukherjee. 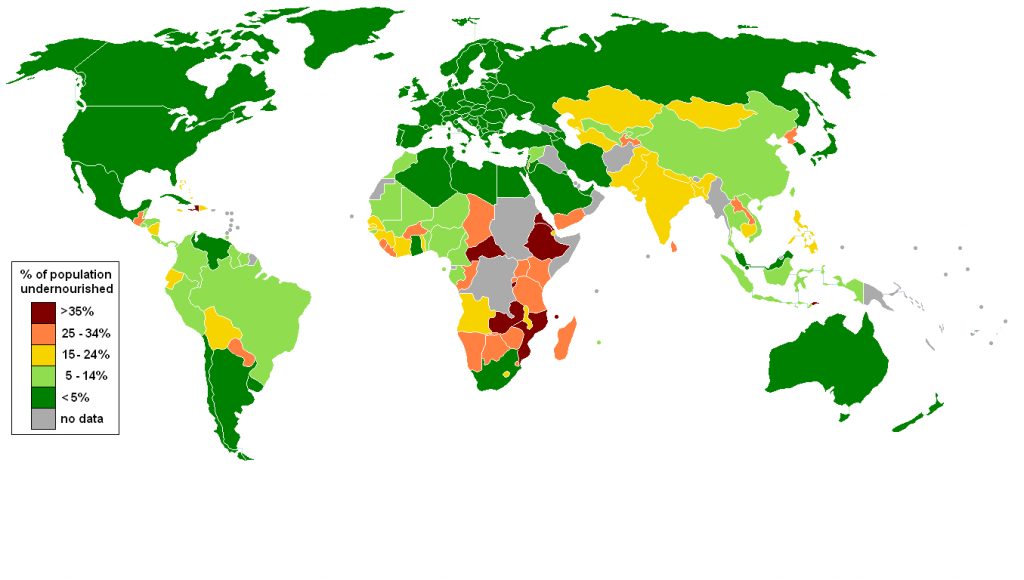 PERCENTAGE OF POPULATION SUFFERING FROM MALNUTRITION

A 2005 World Bank report estimated just five of its poorest states accounted for 80% of India’s child malnutrition cases. What is clear is that, revising the poverty line to have it reflect more real world conditions ought to be seen as a very positive first step, in what should be a new and thorough study of economic conditions, symptoms and causes of economic problems, and their effect upon society. Without further study, merely redefining what poverty means in economic terms, falls short of illuminating the problem, its causes, and what might help remove it.

Forty-three years later, India seems stalled along the path to ‘Garibi Hatao’. But, in revising the poverty line to make it more realistic, the current government seems to be taking a small but significant step forward.